It seems we are losing members of the sailing family left and right these days: Hugh Elliot. Hans Fogh. Hobie Alter. Steve Black. My own sailing mentor, Bob Bigelow.

And even among such illustrious company, Bob “Buddha” Billingham still stands out. 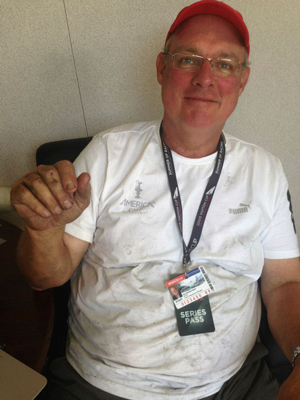 Bob was the most “get it done” guy I’ve ever met. (And for those of you who know my husband, that’s saying a lot.) By the time I joined Bob on the Olympic Sailing Committee in 2005, we were both past our Olympic sell-by dates. But even two decades after he’d won a silver medal (Korea 1988, in the Soling with John Kostecki and Will Baylis), Bob still brought an Olympian’s mentality to everything he did. There was no obstacle too large to overcome—assuming the end goal was worth it.

I’m sure there were other end goals in Bob’s life, including work and family and the America’s Cup. But because Bob never talked about his successes, and actively discouraged anyone else from talking about them either, the only place I saw his impact was in person, on the Olympic Sailing Committee. He got what was different about the world of Olympic sailing in the 21st century—and what was still very much the same. We all like to talk about “back in the day,” but Bob’s stories had a point that was pertinent to the challenges facing today’s athlete.

He was always cutting through the distracting details and bringing us back to our real mission: giving Olympic hopefuls what they need to succeed on the world stage. And he never wanted credit for any of this; he just wanted to know that he’d helped remove a few of the many impediments to success for those trying to win an Olympic sailing medal. He was never afraid totake on the big problems, and he could make the leap from tiny detail to a short, pithy sentence stating “why this is important” in a heartbeat—an invaluable skill on a committee.

The best concrete (sic) example of this was “The Shed”, a building just outside the gates of the 2012 Olympic Sailing venue in Weymouth, England, that Bob helped to secure for US athletes in July of 2008—a few months ahead of the predictable skyrocket in property values, while most countries were still focusing on supporting their athletes in Qingdao, China. US sailors had a private space a few steps from the Olympic venue where they could work out, unwind, and just be themselves—a complete novelty within the Olympic pressure-cooker.

My favorite story about Bob dates back to spring 2012, when most of our team had been selected and all eyes were firmly focused on those Games in England. To open what we thought would be a routine meeting, the OSC Chair, Dean Brenner, shocked us all with an announcement: we’d just had a sudden and completely unexpected reduction in our funding for the upcoming Games. While the rest of us around the table were still trying to digest the details, Bob with his characteristic smile said, “That sounds like a great opportunity.” And within minutes, we were on our way to planning the next step—which turned out to be even better than our original plans.

We will miss you, Buddha. You were a great visionary, and also a great friend—and a ton of fun to hang out with. Watch out, Hugh and Hans and Hobie and Steve and Bobby… Those regattas in the sky are about to become a lot better managed.