Those of us who want to remain active and competitive athletes well into our second half century have learned a few things about ourselves over the years. One biggie is how to properly fuel to keep going day after day. Sailing regattas last anywhere from 3-5 days, and getting tired halfway through an event or halfway through a race day is no fun. 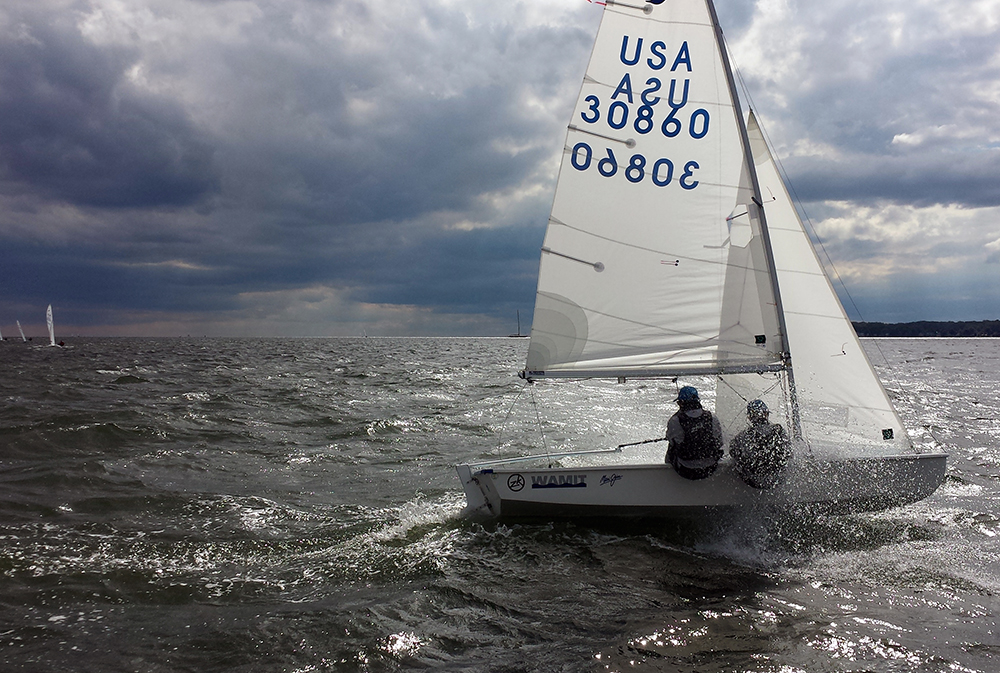 Kim and Carol finished second at their final windy regatta of the year. Photo: Robin Richards

The problem is that what works for me won’t necessarily work for you, because once you get past the basic numbers of how many calories of food and how many ounces of fluid we all need to stay fed and watered, what I need for optimal energy is probably different from what you need. But lots of people have asked me recently about fueling, so I figured it would be helpful to collect what I’ve learned over the past fifteen years into one place.

And since it’s such a personal thing, I also figured it would be more useful to include a second perspective. So I asked friend and fellow sailor Kim Couranz to jump in with what works for her. In addition to sailing doublehanded Snipes with me and her singlehanded Laser, Kim is also a long-distance runner—her favorites are ultra trail runs. Can you say “stamina”?

The Snipe is a 15 foot long wet ride of a sailing dinghy that rewards fitness and strength. We are one of the lighter teams, so letting body weight do the hard work when the wind pipes up is just not an option for us. We have to hike hard to keep up with the big boys.

You can also toss out your pre-conceived yachtie images of well-stocked coolers and umbrella drinks. Instead, think 2-3 water bottles each and as many sports bars (me) and gels (Kim) as we can carry in our lifejacket pouches. Because our carrying capacity is limited, what we do bring along needs to be effective—and easy to eat/digest in the ten minutes or so we have to scarf it down between races.

Those races last 50-70 minutes. We usually have a 30-50 minute sail out to the race course and back to the dock after racing, which means we’re on the water for 5-6 hours.

I’ve used Hammer products since 2000 and I’ve always been impressed with how well they work for me. I also like the fact that they don’t include any artificial sweeteners… and in my Olympic years I really appreciated not worrying about a positive drug test.

Here’s what Carol eats on an average race day:

And here’s what Kim eats on an average race day:

What Kim eats on a trail run day:

We like food, but what we eat is less than half the story, because we haven’t talked yet about hydration. The most important thing I’ve learned over the years is that staying hydrated is by far my biggest personal fueling challenge. Once I get behind, it’s really hard to catch up—and the side effects will probably carry over into the next day.

When I say “hydration,” I don’t mean “water.” Yes, fluid intake is important, but electrolytes are even more important. I seem to need more than most people, which is why I’ve stopped drinking “just” water while racing. I don’t understand the chemistry; I just know that when I get behind on electrolytes, my reaction time goes to hell. Then I start doing stupid stuff on the race course. And then Kim turns to me and says, “Time for a smart pill.” (She’s referring to Hammer Endurolytes, which we’ve discovered can catch me back up again almost instantly.)

So here’s what Carol drinks on an average race day:
15-26 oz. per hour of water mixed with one scoop of Hammer Sustained Energy and ¾ scoop of Heed. Sustained Energy provides a balanced mix of carbs and protein; Heed includes complex carbs, rather than the simple sugars most sports drinks include, and also has a subtle flavor that makes it all go down easily.

What Kim drinks on an average sailing day:
1 water bottle per hour with Endurolytes Fizz.

What Kim drinks on a trail run day:
I generally fill up my fluid bladder with just water, so I can more closely track what I’m putting into my body (and I’m a bit of a cleaning freak; that way I also don’t worry about “stuff” lingering in my water bladder). I’ll have 1-2 Endurolytes every hour (depending on heat/humidity), and if I’m racing, I’ll add on 1-2 Anti-Fatigue Caps as well.

So that’s what works for us. It may take awhile to figure out what works for you. And because fueling is such a personal thing, it’s very important to test a new product before race day. It’s also important to like the taste of whatever it is you’ll be trying to choke down when your adrenaline is running. Otherwise, you’ll end up with a bunch of half-eaten bars in that lifejacket pouch at the end of the day. (Kim, stay away from my sandwich.)

And if you decide to give Hammer products a try, use my customer number 80243 to get a 15% discount on your first order (and me a credit toward future orders). Thanks, and happy fueling!