Last weekend Kim Couranz and I won the Colonial Cup, beating 26 other Snipes by posting the most consistent scores over Saturday’s four light air races. (Sunday’s racing was cancelled due to high winds and rain.). It was hot and extremely humid, described by one Chesapeake local as “like living in a wet lint trap,” and even the puffs didn’t provide much cooling. In short, it was a really tough day to stay hydrated.

Note: I try not to talk too often on this blog about supplements and nutrition, because I figure you come here to read about books and boats. That said, I consider Hammer Nutrition products such an integral part of my success—both on and off the water—that, occasionally, I have to rave a little and share some insights. So if you’re interested in hydrating well, or just feeling and performing better, read on. If not, here are some other posts about books and boats, and I’ll be back on topic next week. 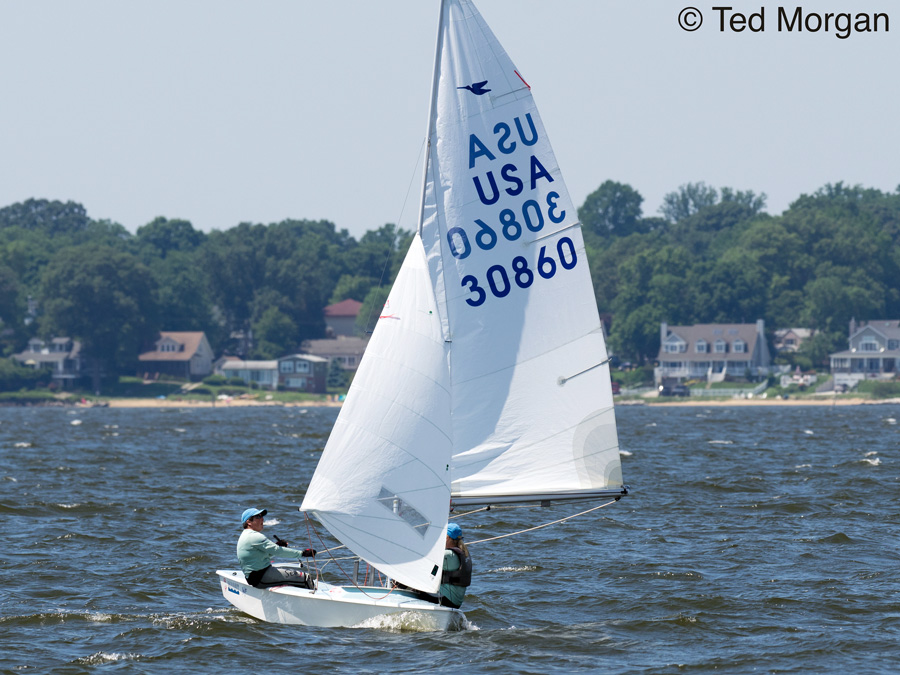 Thanks to Ted Morgan for this photo, which was taken during the much windier 2017 Colonial Cup.

There’s no way to prove that good fueling won us the last race of the day, but I believe that’s the case. When the breeze shut down on the last leg, we were still thinking and working and looking around, trying to line ourselves up with the next puff and puzzling out how the current was affecting our apparent wind. Talking to other teams back on shore, it sounded like most weren’t functioning quite as well as they had at the beginning of the day.

Looking back, the key to a successful Saturday began the day before; staying hydrated while rigging the boat on an extremely hot Friday afternoon. By “hydrated,” I don’t mean just water; too much of that without enough electrolytes will just create uncomfortable belly sloshing. While rigging in the hot parking lot at Severn Sailing Association (sunny, 82 degrees, and 93 percent humidity), I added a Fizz to my water bottle two of the three times I refilled it; that means I consumed 96 ounces of fluid in three hours. I also fended off the “hot and grumpies” with a couple of Endurolytes Extreme when I finished up for the day. That made me a much more pleasant dinner companion that evening, and a better skipper the next day.

Thanks to overcast skies that kept Saturday’s air temperature (77 degrees) just under its relative humidity (80-85 percent), we didn’t drink as much as expected during our four one-hour races. We each brought three water bottles with us but ended up pouring out the third before the last start. What I did consume a lot of was Endurolytes Extreme; three per one hour race. That’s on top of a Fizz in each water bottle, which also replenishes electrolytes.

Fueling is highly personal; it took me a few years to figure out that I need to consume more electrolytes than most people. If I don’t, I start making (even more) dumb mistakes on the race course. Thanks to Hammer’s easy to carry supplements and fuels, I never hesitate to bring along more fuel and supplements than I’ll need each day—even on a weight-sensitive boat like the Snipe. By customizing my fueling to the weather and exertion levels, I stay hydrated no matter what combination of wind and heat and humidity each day brings.

Of course there’s a lot more to winning a regatta than just staying hydrated; training, fitness, and experience also play their parts. But none will work if we don’t bring it on “the day.” For more information about fueling, visit Hammer Nutrition. Include my customer number 80243 on your first order, and both of us win; you’ll receive a 15% discount, and I get a referral credit toward my next purchase—which will help me stay hydrated at my next regatta.