As most of you know, I’ve been a devoted fan of Hammer Nutrition’s products for 13 years. In that time, both their products and customer service have constantly improved—especially the newsletter, which has gradually morphed from a chaotic bundle of useful information into a high quality magazine. I have written before about Recoverite, Endurolyte Fizz, and Personal Fueling. Today I want to eat some words I never wrote down: all the nasty thoughts I ever had about Hammer Gels. 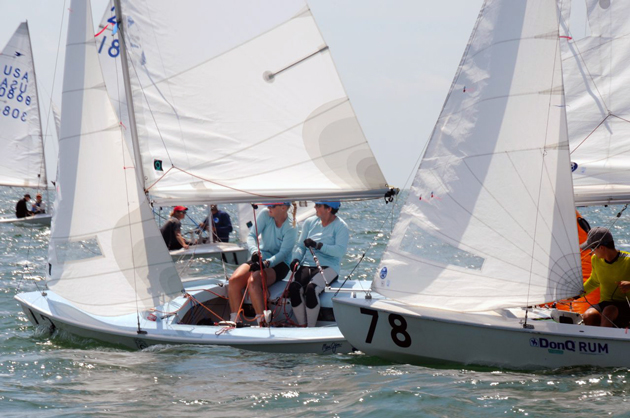 My teammate Kim Couranz (also a Hammer Athlete Ambassador) has been consuming a gel between races for the past several years. And since we sail together on a fifteen foot boat, I couldn’t help but notice. I didn’t quite turn away every time, but I also quickly turned down any offers of trying one. There was something about the idea of eating a squishy substance out of a small packet that turned my stomach. No thanks, really; I’ll just sip at my bottle of Sustained Energy/Heed and munch on a Vegan Recoverite Bar.

Then Hammer announced a new flavor: Nocciola. What the heck, I thought: I’ll try one, in the privacy of my own boat. Kim won’t tell anyone if I spit it out—as long as I aim over the side, into the water.

So a few months ago, on the first day of our first 2015 regatta, I tore off the top of a gel packet. Then I stuck it in my mouth, and squeezed. I was probably wincing in anticipation of gross… and then it hit my tongue. “Gelato. It tastes like hazelnut gelato.” Ewww had turned to “YUM!”

Our next regatta was in Clearwater, Florida. The first day we had a one hour sail out to the race course; four one hour races on the beautiful Gulf of Mexico, in long swells that require constant trimming and body movements to keep the boat moving fast; and then an hour’s sail back to the beach again, against a two knot current. I brought along six water bottles, thinking it was too much, and sucked the last one dry on the sail home. I also brought more food than I thought I’d need—and ate everything.

Since they were so easy to carry, I’d loaded up my lifejacket pocket with gels. Mimicking Kim, I ate one between races. With only a 10-15 minute break (depending on where we finished the previous race), there was never enough time to eat, drink, pee, adjust the rig, and take a breather. Having an easy-to-consume and easy-to-digest snack was perfect.

Kim was right: gels are the perfect boat food.

Now that I’m back home between events, I’ve been adding a tablespoon of gel to my morning smoothie (Montana Huckleberry, one of Kim’s favorite flavors.) Fortunately Hammer offers gel in bottles as well, so I don’t have to open a packet every time.

And now for my biggest confession of all: I’ve got a new favorite afternoon snack. Banana slices and a little bit of granola, doused with a tablespoon (or two) of peanut butter gel. It’s like having dessert at three in the afternoon. As one athlete put it on the Hammer Facebook page, “You know it’s good stuff when kids like it.”

Thanks to Hammer for making such great-tasting, high quality fuel. And thanks to Kim for not laughing too hard when I spooged gel #3 all over my shirt. “Put it in your mouth before you squeeze,” she suggested. And then (too late) she explained: “The consistency changes quite a bit, depending on the temperature.”

Apparently there’s an entire technique to consuming these things. I’m looking forward to learning more of Kim’s gel tips and tricks this summer, as we prepare for the Snipe Worlds in Italy.

In the meantime… anybody want to come over for dessert?

For more info, visit the Hammer Nutrition gel page… where Nocciola is, wisely, the default flavor.

One Reply to “Hammer Gels: From Ewww to Yum”