In part one of Deer in the Headlight, I explained how we managed to drive 2000 miles across the country after hitting a deer. That’s unexpected, but what happened once we got to San Diego was also a bit of a surprise. So here’s more detail than you probably needed about getting the car fixed.

When we got to the Audi dealer in Miramar, he took one look at the car and said “It needs body work. We can’t do that here.” Then he recommended World Auto Body just down the street, which had also been recommended by a friend. We drove a few blocks and turned into a small parking lot, where we were greeted by the owner, Robert Shamshoum. He looked quite unfazed by all the damage, and said he could complete the work “in a few weeks” as long as the insurance company approved the repairs promptly and the parts weren’t back ordered. 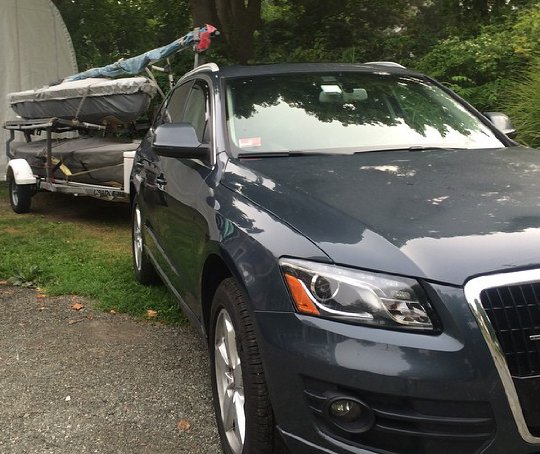 Here’s what the car and trailer looked like when we left RI. After 4 days with World Auto Body, the left side looks even better than this.

Andrew and I would only be in San Diego for a week (to sail the Snipe Western Hemisphere and Orient Championship), but we were flying home afterward. Team angel Ted Morgan (husband of my Snipe teammate Kim Couranz) would fly out ten days later to drive the car and boats home, so luckily we had a bit of time to spare. And luckily we had friends who could retrieve the car, even after I flew home. So we left the car with Robert, who gave us a ride back to Point Loma (about 20 minutes away). It was an unexpected treat from the owner of a body shop, though we had all figured out by then that my car needed a lot of work.

(One additional lesson learned is that insurance companies will try to direct you to a “recommended” repair facility, though they are required to tell you up front that it’s your choice where to have your car repaired. Fortunately Robert had warned me of this, so when the agent started to look up where in San Diego State Farm would recommend, I could say, “Don’t bother.”)

Robert also suggested I check in with State Farm early and often, to make sure they didn’t drag their feet on getting the estimator out to look at the car. I called them the next day, but the date had not yet been set; since it was a Friday, the agent suggested I call back on Monday. At that point I wasn’t sure whether the car would be done in time for Ted to drive it home as planned, so Kim and I started coming up with many Plan Bs. Since all involved more sailing in San Diego, it was hardly a dull weekend. And oh by the way, we had a big regatta that started Monday, so there was plenty of non-car stuff to think about too.

When I finally called State Farm Tuesday morning to ask when they could look at the car, I had my first pleasant surprise. The estimator had been there on Saturday, and they had already issued a check for the damages (which totaled even more than I had predicted). So then I called Robert to see when he could start the work, and he told me they’d already ordered the parts and were underway! Best of all, he was hopeful he could return the car to me three days later, before I flew home. That would make everything easier, since I could check over the car personally after it was finished.

There were a few small glitches, more parts that were needed, an even higher bill at the end, and Robert’s crew had to work late Wednesday night… but sure enough, I picked up the car Friday afternoon, in between finishing off our regatta and the final closing awards dinner. And it’s beautiful, better than new (though I forgot to take the picture that would prove that). Robert’s manager told me, “Your file never left my desk.”

So this long story has a happy ending, thanks to several helpful friends and a few businesses who did their job while I went sailing. Thanks to Audi for building such a great car. Thanks to State Farm for getting the paperwork done so quickly. And thanks especially to World Auto Body, for working late and bringing my car back to better than new in record time. Because of you all, we won the deer in the headlight war.

One Reply to “Deer in the Headlight: More Good Luck”