When Nell’s Great Aunt LouLou dies in 2009, she leaves all of her jewelry to her prickly granddaughter, Pansy—except for a very old and unusual necklace, which she specifically wills to Nell. She also appoints Nell as the estate’s executor, partly because Nell is a well-respected lawyer. So even though Nell and her parents have always stayed away from the Quincy family dramas, she is drawn into the mystery of the necklace’s origins.

(And that’s only the first chapter.) 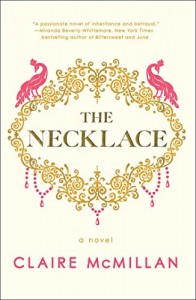 The question, of course, is why.

In the second chapter, LouLou’s brother Ambrose takes us back to 1925, the year the necklace first came into the family. After that, the story alternates between past and present. And since everything we readers need to know is revealed through dialogue and on-site description, we feel like we are right there in the breakfast rooms and along for the country rides as Nell finally understands the long-ago family drama that explains everything.

In both past and present, the language and sentence structure sing. The dialogue is perfectly pitched to sound “normal” while also revealing surprises and a great deal about each character, and there’s just enough description. Here’s one example, from the first chapter, just after Loulou’s will is read:

‘She always did feel guilty about your mother,’ [Uncle] Baldwin continues to Nell in the magnanimous tone of someone secure that he’s gotten everything he wanted.

I especially enjoyed Claire McMillan’s early descriptions of the estate lawyer. “Nell recognizes a fellow pro,” the first chapter explains. “She’s honed similar political skills in depositions and courtrooms and knows exactly how much effort is required to make this look natural. As she watches his finesse, she decides that if one of the most expensive firms in town, plus Loulou—who’d been a notorious snob—can trust him, then she’ll keep an open mind.”

All of the characters have their flaws, even the narrators, and none is too quick to realize their mistakes (or to be forgiven for them by the others). That makes them feel like friends or even family rather than book characters, and while this is a large part of the book’s charm such familiarity also breeds my primary complaint: it assumes we are already aware of the location. In the first chapter, the only references to place are actively elsewhere; Nell’s parents “preferred living in Oregon, where they’d met, and where Nell lives now. They’d put a country between themselves and the Quincys reflexively sizing them up. Despite this removal, Nell’s mother would insist they make a pilgrimage here most summers.” Which left me to wonder: Where, exactly, is “here”?

Maybe the setting vagueness was intentional (to make the story more universal), but to me it was distracting. Two chapters in, I actually paged back to the beginning (and also re-read the jacket flap) to see if I’d missed the naming of an actual place. Nope. It wasn’t until several chapters in that the city was finally specified—and instantly I had a better feel for the setting. Why keep that a secret for so long?

Later on in the book, there is a similar issue: a change of location that is too vague and so interferes with the story. It’s as if the author worked so hard not to “tell” any details that a few important ones were lost.

Long but not overwhelming

At three hundred pages, The Necklace is long enough to get lost in but not overwhelming—especially since it’s most definitely a page-turner. Each chapter left me wanting to know more, and the way past and present are interwoven moved the story forward at a very consistent pace. Kate Morton fans will enjoy this book, though readers who find her novels too dense will be intrigued by the lighter language of this book. The English language is a very flexible tool, and in the right hands it can be made to accomplish anything.

One Reply to “Book Review: The Necklace”