Home »Books»Review»Book Review: Believing the Lie (if not the cover)

I’ve been a fan of Elizabeth George’s Inspector Lynley novels for a very long time, so on a recent library visit I was thrilled to find a new title lurking on the shelves. (For those of you planning to read any of these, don’t worry: there will be no spoilers here.) The fact that this one was more than two inches thick was an added bonus; even if I let myself devour it as fast as I wanted, I was still assured of several evenings of immersion in a new world. 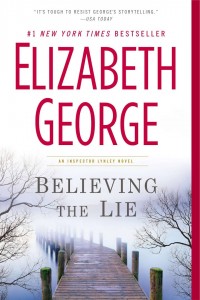 In contrast to how I shop for books from unknown authors, I barely glanced at the cover photo before I checked out Believing the Lie. It was only once I finished the story (devoured, check) that I noticed the dock—and the more I looked at it, the less appropriate it seemed. I’ve never been to the English Lake District, where most of this story takes place, so it’s possible there’s a private pier in the area built with pressure-treated pilings and decked in well-maintained teak… but if so, it’s not mentioned in this story. My guess is that the photo was found on a US stock site, perhaps the result of a search on keywords like “fog”, “coast,” and “mystery.” Then again, thanks to its membership in a bestseller series, all this particular book cover really had to accomplish was to provide a legible background for a name and a phrase: “Elizabeth George” and “An Inspector Lynley Novel.”

In each of the 19 books in this series (and yes, I’ve devoured most of them), the two main characters (Scotland Yard Chief Inspector Thomas Lynley and his partner, Detective Sergeant Barbara Havers) age and grow while solving crimes that are variations on the murder and mayhem theme. Along the way, they delve into social issues at work and at home: rape, incest, homophobia, race relations… you name it. And that deep development (of both characters and their society) is how this book achieves its heft of 610 pages, without wasting too many words (more about that in a moment).

Once I opened the cover, I quickly became lost in the story’s unique twists and turns. I’m always impressed (both as writer and reader) with how George lets her characters’ strengths and weaknesses propel the story forward. “If you don’t understand that story is character and not just idea,” she explains in Write Away, One Novelist’s Approach to Fiction and the Writing Life, “you will not be able to breathe life into even the most intriguing flash of inspiration.”

Her books begin with a character in a situation. And that situation leads to an action, which triggers another action, like a carefully laid row of dominoes: “It knocks the next one over and so forth.” The really delicious part about George’s writing is that once we get to know her characters, their actions usually seem quite inevitable—though not quite predictable. And that gives her the luxury of waiting until later in the book to show us what actually happens next.

By writing in the third person, George takes us inside many different heads even while constantly (and seemingly effortlessly) moving the story along. She might let a story line dangle for a chapter or two, while she brings us up to date on another character’s progress… but trusting her to tie up any loose ends allows us to enjoy the suspense even more.

Another reasons she is able to let one story line go offline for a few chapters is that she ties seemingly unrelated characters together with small details. My favorite example in this latest book comes about halfway through, when she introduces a minor (offscreen) character. In the very next section, which is told from a totally different perspective, the name appears again. These small links build strong chains within the story, leading us to its surprising and yet inevitable climax. I will let you discover it for yourself, but be advised—it does not involve a dock of any sort.

As for that 610 page count: there were definitely more wasted words than I expected. George moved to a new publisher for this book, and it did seem a bit less finely polished than previous stories—especially in the sections told from Barbara Havers’ perspective. Instead of reducing a paragraph of internal dialogue down to one or two ideal sentences, the numerous originals were often allowed to remain. They made their point—just not quite as elegantly as I expected.

Fortunately, even George’s less polished prose is a pleasure. But those extra sentences (which some other readers have called “wasted filler”) remind us how important editors are; they have the power to make a book the best it can possibly be—if they are granted the luxury of time. With two bestselling names on the cover (the author’s, and the main character’s), the publishing decision-makers probably figured that good was good enough.

Last but not least, here’s one final side note about format: If this had been an ebook, the size and scope of the story would not have been as physically obvious. Then again, an electronic version would have spared me the distraction of tiny penciled handwritten notes in the margins, the residue of some very inconsiderate previous reader.

I’ve already purchased the next book in the series, and after I devour that one there’s another that just came out last fall. It’s a lot easier to read books than to write them, especially at this level of detail. So thanks to Elizabeth George for all of her hard work. I can only hope she keeps coming up with new Inspector Lynley stories for many, many years to come.

One Reply to “Book Review: Believing the Lie (if not the cover)”