Several years ago, I was deep into “dictating” an argument between two main characters, fingers racing across the keyboard as I tried to ratchet up the tension, the voices in my head growing more and more shrill—when, suddenly, the phone rang. No, not my actual phone—the buff-colored phone in my protagonist’s small house, which was sitting on a bench next to the sliding glass door.

I could see the phone in my head (one of those state of the art 1980s units, with a really cool lighted keypad hiding under the handset). And I could hear it ringing (the electronic bells of the iPhone “classic” ringtone). What I still had to figure out was who it would be on the other end. 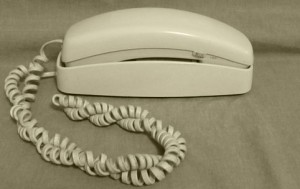 (Side note to millennials: Back in the late 1900s, landline phones did not have any sort of digital readout, so there was no way to know who was calling until you heard the voice or the name.)

I was reminded of this phone’s challenge by a recent question from author JB Chicoine. I’ve become Chicoine’s informal sailing consultant, and in a discussion sparked by her recent blog Waylaid by Research, she asked me how a sailboat would become disabled. I told her that sails often ripped, but the boat in her story was a yawl. And one ripped mainsail would not really disable a yawl, since they often sail under “jib and jigger.”

Hmm, she said. The boat needs to be fully stopped mid-ocean, for an hour or so. How would that happen?

I won’t disclose my suggestions, because she may or may not weave any of them into her next book, Portrait of a Girl Adrift. But it made me remember that ringing phone from years ago. Because who besides a fiction writer would know what happens next and then has to back-fill the facts, to make it all fit into the story?

The best novels read like a falling row of dominoes. But those dominoes usually don’t land on the page fully formed, in exactly the right location to take out the next one. Even once we understand what happens next, we have to carefully drop in the details that will make it add up for the reader.

I like to say that my characters determine the arc of a story, but they really only share the big bold facts with me. (We were arguing, and then the phone rang. Figure it out.) They knock over the dominoes, but they leave it to me to place the before and after details in just the right location—while making that placement seem like the only logical one. And building that progression takes time, effort, and yes, research—especially when the subject isn’t a familiar one.

The beauty of fiction writing is also its biggest challenge: once we build a world and set our characters free, we can’t always anticipate what happens next. Even when they show us the next big domino, we still have to line up all the others to make the story seem credible.

And for all of you wiseacres who figure that caller ID takes all the mystery out of this process, think again: today’s fiction writers can happily spend an entire morning staring into their imaginations, trying to figure out what number is showing up on a ringing iPhone. And the answer will likely be different for each and every one of us.

2 Replies to “What A Ringing Phone Doesn’t Tell Us”