Last week I had the honor of hearing America’s Cup winning skipper Jimmy Spithill talk to the 2016 Olympic Sailing Team and its supporters. Jimmy has never been to the Olympics, but he is certainly qualified to talk about becoming a champion, which is arguably one of the most important (and most easily overlooked) aspects of Games preparation. 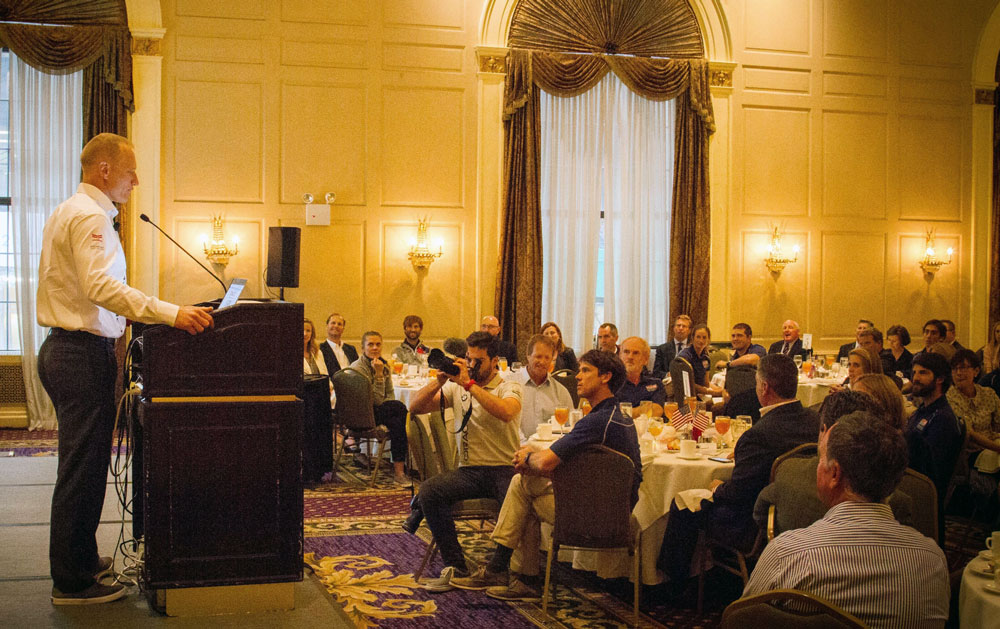 Jimmy Spithill talks to US Olympic Sailing Team and supporters about being a good teammate. Photo courtesy Will Ricketson/USSailing Team Sperry

Jimmy chose as his starting point the most humiliating story possible. In 2012, on the seventh day of sailing their brand new AC72, he said to his team, “Let’s go upwind one more time.” That regrettable decision eventually led to a very public capsize under the Golden Gate Bridge and the eventual breakup of both boat and wing—only ten months before the 2013 America’s Cup began. Fortunately, no lives were lost.

Jimmy wasn’t telling this story because it was so dramatic, though the video footage certainly captured the danger and despair of losing a boat. He told it because campaigns, he says, always have a defining moment, and that’s what the capsize and boat break up turned out to be for Team Oracle. The way the team pulled together after that disaster made their historic comeback possible ten months later, because even with just one race to go, they all truly believed they could still win the America’s Cup.

Jimmy never made it sound like a foregone—if surprising—conclusion: that losing a boat could help them win the Auld Mug. Instead he talked about growing from challenges. All teams have them, he reminds us: the only choice is how you respond.

High Performance Director Charlie McKee was once an America’s Cup teammate of Jimmy’s, and during his introduction he identified Jimmy’s greatest strength: balancing the ego that keeps him believing he can win with the larger perspective of being a team player—which keeps that ego in check. And later on, Jimmy hammered that same point home: doing whatever you can to make your teammates better is the easiest way to become a champion.

It’s almost seems like a contradiction, that focusing on the team helps us grow as individuals, but his theory resonates with me. When I focus on myself, that’s usually a recipe for disaster. When I focus on working better with those around me and trying to help others improve, I get stronger and better.

The way Jimmy made his big point (that difficult times are the defining moments that make or break teams) also showed balance between ego and team. He managed to use video to its best purpose: not as an escape from the hard work of public speaking, but as a visual reinforcement of the story he’d chosen. Of course it helps to have a video crew following your every move, and an editing team to splice together hours of footage into a few minutes of dramatic highlights. But how to use such resources to their best advantage is a personal choice, and I certainly came away with a new perspective on that famous boat breakup—and the even more famous comeback.

Being comfortable in the public eye is one of the many challenges of becoming an Olympian. And I like to think that our 2016 Olympic Sailing Team is a little better prepared now to take on that challenge, as well as the many others that lie ahead, after hearing champion Jimmy Spithill share some words of wisdom.

Being a good teammate is definitely easier said than done, but so is becoming a champion.