Last weekend I achieved a personal best, finishing second overall at the 2013 Snipe Colonial Cup in Annapolis. And in addition to thanking my teammate Kim Couranz, I have to send out a very special and heartfelt thank you one of our long-time sponsors, Hammer Nutrition. 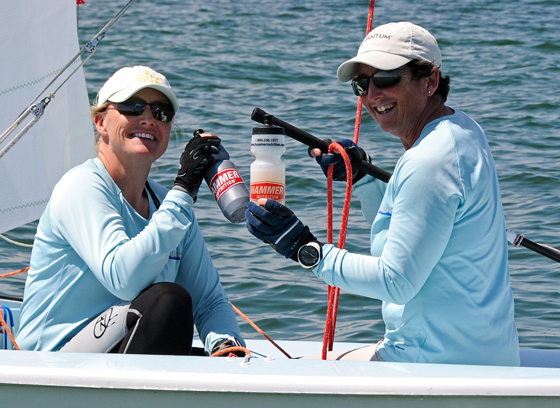 Kim and I showed off our Hammer water bottles to photographer John Payne.

I love sailing with Kim. She’s smart, she’s funny, and she knows me so well she can tell when I’m about to do something really stupid. What we’ve both realized is that usually that’s because I’m a little behind on electrolytes (no, really). So between races, she’s always telling me to “Drink.”

Small sailboat racing can be very intense at times and very boring at other times, but our hands are almost always busy. While racing, it’s usually impossible to grab even a sip of water; we’re too busy adjusting sails and keeping the boat going in the right direction. When it gets hot and humid, (like it did this past weekend in Annapolis), I’m usually a bit behind on electrolytes by the time we finish our first one hour race. After two races, my mouth is dry; after three races, I’ve got the beginnings of a headache.

And if it’s a four race day like last Saturday, I’m usually not much fun to sail with by the end of the day.

Dehydration really does make me stupid—ask any of my three teammates about day two of a certain World Championship back in 2003, and they’ll tell you how badly I sailed after not hydrating well on day one. Even before I have any other obvious symptoms, my split-second decision-making ability deserts me. And since most of our races involve a constant stream of such choices, that can make for a very disappointing day.

Which is why I was so excited to discover this past weekend that Hammer Nutrition’s Endurolytes Fizz can actually catch me back up again once I get behind.

I’ve used Hammer products for fifteen years, and their Heed (electrolyte replacement) was a great step forward for me from water and better known fluid replacement drinks. But once behind, I wasn’t ever able to catch up again.

Last summer I discovered Endurolytes caplets, which was the first time I’d ever felt a dehydration headache dissipate so quickly… but the Fizz seems to be even more effective. Best of all, they’re easy to carry and consume; last weekend I stashed a tube of tablets in my lifejacket pocket and between races, I’d drop one into my water bottle. In seconds, I had a great tasting beverage—and I swear that with each sip, I could feel the storage tank of each individual brain cell filling up.

Kim and I discussed whether Fizz works better because it also encouraged me to drink more fluid, compared with a mouthful to wash down a few Endurolytes caplets; the smart people at Hammer probably have an answer for that. All I know is that I don’t have to worry about competing in hot climates anymore. What used to be a real personal weakness has turned into a strength. Thank you, Hammer!

And yes, I am a Hammer-sponsored athlete. I signed on with them several years ago because of two other products I’ve used for over a decade: Whey protein and Recoverite. The first gets me going in the morning, and the second makes sure I’m ready to go the next day too. In between, I now know I can keep going in any temperature/humidity combination, thanks to Endurolytes Fizz.

So when Kim tells me to “Drink”, now I know what kind of mickey I’ll be slipping into my own water bottle.

One Reply to “Drink to Win: Fizzy Hydration from Hammer”