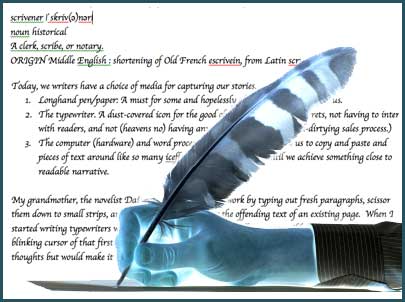 Back when the luscious and literary word “Scrivener” was popular, there was no choice of how words were recorded. Some sort of writing implement was used to etch or draw letters on to some sort of (hopefully) flat surface. Good light was expensive, and so was good paper. Just transferring ideas into readable form was a huge challenge.

Today’s authors have a choice of media for capturing our stories:
1. Longhand pen/paper — a must for some, hopelessly old-fashioned for most.
2. The typewriter — a dust-covered icon of the good old days (back when authors were starving in garrets, seldom interacted with readers, and never—heavens no—had anything to do with hand-dirtying sales.)
3. The word processor — which allows us to move pieces of text around like so many icefloes in a winter harbor, hopefully stringing together a readable narrative.
4. Scrivener — “The biggest software advance for writers since the word processor.” (That’s according to author Michael Marshall Smith.)

My grandmother, the novelist Daisy Newman, spent most of her fifty-year career tapping away on a series of typewriters, grudgingly switching to a word processor for the last book she published. Even after she adopted the word processor, her method of editing remained the same: type out a fresh paragraph, scissor it down to a small strip, and then paper-clip it over the offending text on an existing page. Even to my eight year old eyes it looked cumbersome, but it worked for her; she produced numerous novels (and one sprawling non-fiction history of Quakers in America). Four of her books are still in print, almost twenty years after her death.

When I started writing typewriters were the tool of choice, but their spelling was terrible and editing seemed cumbersome. What a joy to discover the blinking green cursor of that first word processor! Now my typing could keep up with my thoughts, and I could go back later to edit my thoughts into something that would be understandable to others.

And two decades later, I’ve discovered an even greater joy: the ultimate flexibility and mind-expanding potential of Scrivener.

According to its website, Scrivener was designed for managing large writing projects and is “particularly suited to writers who don’t always think in a linear fashion.” Need to access a photo or website that captures the flavor of a particular scene? Have a shimmer of an idea that needs to be written down, long before it will be obvious where it belongs? Want to capture a snippet of dialogue that comes to mind when imagining a character? Scrivener makes it all easy. After using it for just a few months, it’s completely revamped my approach to big writing projects.

I’ve never been a good outliner. Oh I’d start off by writing an outline, but once I had the barest sense of a story I would turn the characters loose. This has led to some great scenes and two published books, but I’ve also followed barely-formed characters down a lot of dead end streets—and hung on through many a wild goose chase.

Thanks to Scrivener, I’m test-driving a different approach. Now I write ideas on electronic “note cards” and then group them together by character name or subject or scene. These note cards can easily be reordered on the corkboard, and there is room for as much detail as necessary on empty “pages” that lurk in the background. Click on the note card and bing! The details pop up in a different window.

Research ideas (even those as vague as “talk to Cathy” ) can be collected in a special unstructured section that accepts URL’s, photos, PDF’s—almost any file form. No more searching my desk and pockets (and washing machine) for that one wrinkled receipt with the most important link ever written on the back.

I’m really enjoying the freedom of this new approach, but I’ve had to do some brain rewiring. Though I’ve never been a slave to daily word count I have found comfort in the pages piling up, even if half or more of those pages will eventually be winnowed out. This time around, at least in the planning stages, there is no buildup of text to reassure me that my story is coming together. All I see is ideas that may or may not fall into place in a story that may or may not turn out as planned.

Writing is much more than just putting words on a page, and how that “page” appears even in first drafts can be hard to separate from how we view the entire project. Scrivener is teaching me how my brain works, and that’s leading me to a new way of building a story.

Will it work? Just like with longhand, typewriters, and word processors, there’s still only one way to find out.

2 Replies to “Scribbling in Scrivener”