When the local artist shares her first choice of painting locations, you just go. That’s how we first “discovered” Clogher Beach, a horseshoe-shaped cove on the west coast of the Dingle Peninsula, which itself sticks out from the southwest corner of Ireland. The sun was shining, punctuated by a few easily spotted rain showers that constantly changed the colors during our hike up onto the bluff. As far as we could see south and north, rocky points jutted out into the ocean. (As the locals phrase it, “next parish west is Manhattan.”) Below, our old friend the Atlantic crashed white against the dark rocks, constant as a beating heart, ready to soothe, annoy, or mesmerize—depending entirely on the viewer’s mood.

Both light and scenery were incredible, and Paul quickly pulled out tripod and camera. But looking around the bluff, my strongest feeling was an uncanny sense of familiarity. There was an obvious explanation (this place had inspired one of my favorite Carol Cronin paintings)… but there was more to it than that. After several minutes, I “recognized” the features of Monument Point on Brenton Island, an important location in Ferry to Cooperation Island—which meant I’d stumbled onto a real-life version of a peninsula previously seen only inside my head. All it needed was a stone monument to duplicate the place my characters came to when they needed a refreshing view of open horizon.

It’s hard enough for novelists to explain where ideas come from; it’s even harder to explain where we pick up the details that turn those ideas into stories. I created Brenton Island to dodge the restrictions of an “actual” island setting, wanting to adapt its terrain as necessary to fit the story. Out of that necessity grew a point at the southwest tip, which provides both escape and thinking point for various characters. It was only when I got to Dingle that I discovered it already existed—in a place I’d never been before.

A few days later, I found the monument. Another hike on the other side of the peninsula took us up to Eask Tower. Dingle, it turned out, had graciously collected several pieces of this island I’d created in my head—and then scattered them at random, as if to safeguard Brenton’s secrets until it’s ready for its own visitors. 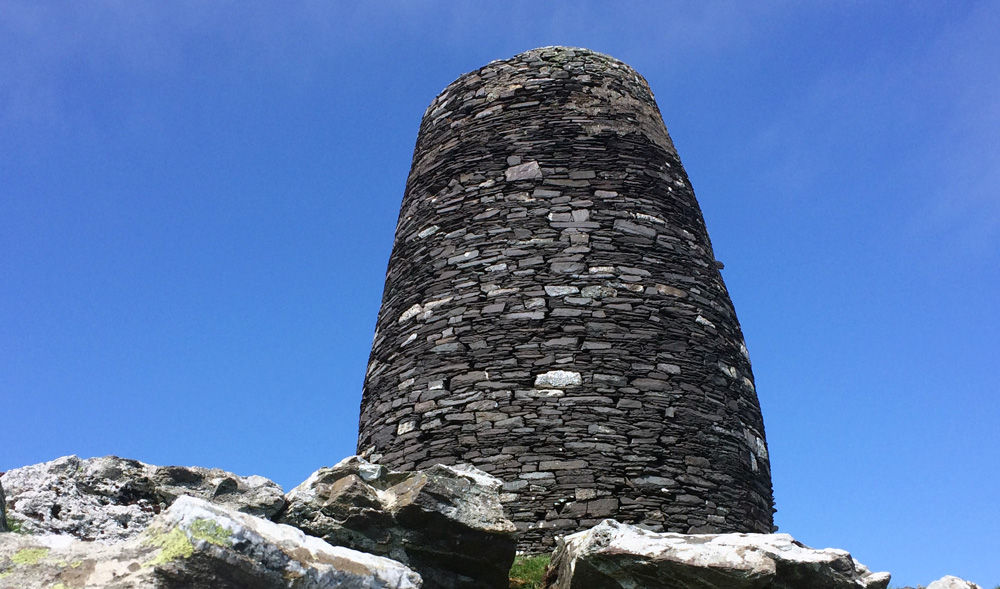 And one more thing: the best local coffee shop in Dingle is called “The Bean.” Guess the name of Brenton Island’s “best” (read, only) coffeeshop!

If I’d been to Dingle before I started writing about Brenton, it would be easy to chalk all of this up to memory. Instead all I can do is marvel at the impossibility of it all: traveling three thousand miles from home, only to find a rocky bluff and a monument (and a coffeeshop name) that so closely resemble a place I built with my imagination. Usually the most important gift of travel is stepping into the unknown; this time, in this particular place, it felt like coming home.