Home »Books»Diving into “The Swimming Pool”

I spent summers on Cape Cod as a kid, and as soon as I graduated from college I moved there. I still get back as often as possible to visit family and friends. And this past year I spent a lot of time dreaming about the area as I wrote and edited my second book, “Cape Cod Surprise.” So when I saw Holly LeCraw’s debut novel “The Swimming Pool, ” I decided to treat myself to a fun read about the Cape (which, after all, is a much easier form of enjoyment than writing about it). 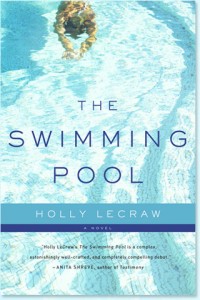 The jacket flap told me that “The Swimming Pool” was the story of a young man named Jed and an older woman named Marcella, brought together by their mutual grief for Jed’s father—and a long-kept family secret. With my pre-conceived notions (beach read, familiar setting) unchallenged, I opened to the first page, planning to indulge in the slightly guilty pleasure of what I thought would be a light, throwaway story. Instead I was drawn in by the carefully crafted sentences and lyrical language. After racing through the first chapter, I forced myself to put the book down for a moment, just to breathe. If this was a beach read, I thought, it was gonna be a great summer.

As I devoured the book, I tried to pace myself in order to truly appreciate the careful word choices and variety of sentence structure. I lapped up the apt alliteration of adults gathered around the swimming pool at a neighborhood cocktail party: “…dry and dressed and drinking.” And I luxuriated in each fresh view of that pivotal pool party. Replaying the same scene would be repetitive in less skilled hands, but LeCraw adds a new twist every time that propels the story toward its dramatic conclusion.

It wasn’t until I finished the book that I could stand back far enough to marvel at its construction. LeCraw weaves all the personalities into one seamless strand of a story without restricting herself to a conventional time line or a single point of view. She also avoids cliché, which is what really separates this book from the “beach read” I was expecting. Instead of bedding the bikinied babysitter, Jed turns to Marcella for the only affair that takes place on the actual page. Apparently this twist was even a shock to its author. But instead of reining in her characters, LeCraw adjusted the story… and the result is a rich and utterly unique novel.

In spite of its geography, “The Swimming Pool” doesn’t take place in a world familiar to me. For one thing, there’s not a speck of sailing. The ocean is either swum in, gazed upon, or flat out taken for granted as a background of blue. When competitive spirits need soothing, these characters turn to the sweat-stained clay of the local tennis courts. And there’s that unsolved murder shimmering on the horizon. This is definitely not my Cape Cod.

My one complaint about the story is the direct result of LeCraw’s refusal to stoop to cliché; the murder is “solved” off the page in a rather undramatic but completely logical way. No neatly packaged endings here; instead we are left hungry for more of these complex characters that would’ve burst the bindings of that beach read I was expecting. This may not be my Cape Cod—but that’s a very good thing.