It’s not often that my book life and my sailing life overlap, but it happened last week.

Cape Cod Surprise, complete with layout and cover art, has been sent off to meet the sharp eyes of my publisher and editor at GemmaMedia. [Insert appropriate “cheer” word here, along with much overdone punctuation.] 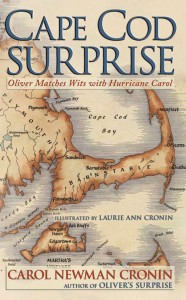 Writing a sequel requires all the same effort as the original book. 1. Dream up enough story line to start writing. 2. Figure out what the REAL story line is. 3. Edit. 4. Re-edit, to make all the little pieces fit the big picture. 5. Ask “is it as good as it can be” over and over, until the answer is “yes.”

In addition, the sequel required a little extra effort. Because this time, I knew I was writing for publication—not just to brighten the eyes of my nephew at Christmas. This time, I was on a deadline. And it had to be even better than “good as it can be.” Better than the first book. I believe it is… longer, richer—yes, better. I can only hope my authorly bias is not blinding me to the faults of my latest creation. I can only hope you the readers will love it too.

I also checked off an important sailing goal last week. Kim Couranz and I won the Snipe Women’s Nationals in Jacksonville, FL. This is the fifth time we’ve won this event (though only our third as a team), so that victory alone isn’t necessarily a goal as worthy of shout-out as shipping off a manuscript. It’s where that regatta victory will lead us that counts: we’re now qualified for the Snipe Western Hemisphere and Orient Championship in September, an international regatta that draws together the best sailors in the class. (And for those who keep score by gender, we are likely to be one of the few women’s teams at the event.)

I’ve written before about the three hats a writer must wear as she works through a project. I’ve also written about the many definitions of success in this brave new world of publishing. For all these reasons and many more, I made sure to celebrate last week’s writing milestone. There are so few finish line tapes across the road to publishing that when we hit one, it’s critical to raise a glass and breathe in the heady air of “I did it!” Because all too soon my manuscript will be back for edits, like a teenager who returns from college with fresh opinions based on his contact with others.

Kim and I should’ve celebrated our regatta win with a raised glass too. Instead we jumped in the van to drive the 13 hours back to Annapolis Sunday night, so she could show up for work the next day.

And it didn’t feel so important to consciously celebrate a finite victory like winning a regatta. It’s so much more obvious that we achieved our goal when there is a printed scoreline of firsts (what we sailors call “bullets”).

Authors have no such scoreline; instead we single out the good reviews and positive feedback, building a moat around our egos to protect against the less pleasant comments. There are always more books that could be sold, more readers that could be touched, more Amazon reviews that could be written.

Besides, Kim and I will be celebrating all summer, as we push to improve our skills toward meeting our new goal (a respectable finish at the Westerns). Because that’s what self-motivated people do: as soon as we achieve one goal, we look for the next.

But for a few days, while my new book is out of my hands being edited by someone else, I will savor last week’s writing victory. Because whether or not this sequel is actually as good as I think it is, I’ve now answered once and for all one of my great internal doubts:

Can she do it again?

And that’s a victory worth celebrating.