Home »Agent»Breaking News: Got an Agent!

A wise author friend predicted it would take me a year to find an agent, and she turned out to be spot on. I started querying literary agents in September 2017, and I’ve just signed a contract: I’m now represented by April Eberhardt! 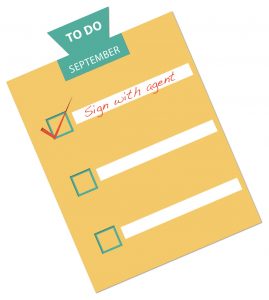 April and I met at a writer’s conference  in—of course—April of 2018. She was already on my query list, but I was pleasantly surprised by the magical way we connected; it was, in the words of a watching writer-friend, “meant to be.” A few days later I sent her the manuscript, daring to dream that she’d love it as much as I did.

Instead her response was a gut-wrenching “no,” but not because she didn’t like it; she just didn’t feel it was ready to publish. When I shared my disappointment with the writer-friend who’d witnessed that magical first meeting, she said, bluntly, “If it isn’t a freaking glittering diamond, then keep working.”

So I wrote back to April to ask, somewhat cheekily, if she’d be willing to read a revision. The answer was “YES!,” along with more specific suggestions that clicked; she obviously “got” the story. So I dove into editing once more, hoping to be done in month. (I’m always overly optimistic with such estimates.) Along the way, I hired a developmental editor, which turned out to be a fantastic shortcut to the book I was really trying to write. And four months later, when I finished, I was finally sure in my heart of hearts that it was the strongest story I could’ve possibly written.

April agreed. “You’ve achieved what we talked about,” she said, after devouring the manuscript in an afternoon. She was also impressed that I’d completed the revision in only four months. This “glittering diamond” had taken more time to polish than I’d hoped, and yet less time than she’d expected.

One week later, we signed a contract. April has already submitted the manuscript to her first choice of publisher; I’ll keep you posted on what happens next.

In all of my sailing, I was always grateful for the support and good humor of my teammates. Now, after a long year of querying, I’ve got a writing and publishing teammate. Which means it’s time to get started on the next WIP.

10 Replies to “Breaking News: Got an Agent!”