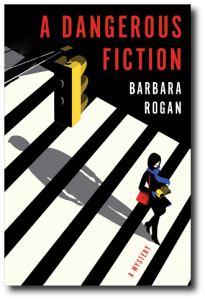 Jo Donovan is the literary agent all writers want—well connected, hard working, and fair. Yet she’s still managed to make an enemy: a spurned writer, she assumes. So begins Barbara Rogan’s A Dangerous Fiction (2013).

I first discovered Rogan’s excellent writing through Rowing to Eden (1996), which was so engrossing I didn’t even notice that my plane landed forty-five minutes late. When I realized she was also the author of this mystery, which I’d noticed when it first came out but never read, I went right down to the library and checked it out.

The book takes us inside the publishing industry, which has changed dramatically since Rogan published her first book in 1982. It starts off surprisingly slow, with an agency monthly meeting, then quickly gathers steam; we meet a threatening writer (nicknamed Sam Spade) who stalks Jo, trying to get her to read his manuscript (the author’s secret fantasy). We find out that another author she doesn’t like wants to write a biography of Jo’s famous author husband, who died quite suddenly a few years ago. Slowly but surely, Rogan shows us how much Jo, our only eyes into her world, has missed seeing—and that leads us to the surprise ending. As a reader, I trusted that one of the many characters I’d already met was the bad guy, but all of them seemed too “nice” or “normal” to be the actual suspect. Once I learned the “truth,” it made me want to read the book all over again, to see how many clues I’d missed while gobbling up the story.

When I did go back to the beginning, I realized there were two reasons why I wasn’t particularly caught up by the first few chapters.

Don’t get me wrong; I really enjoyed this book and I recommend it to anyone who enjoys mysteries about “real” people. I’m just surprised by the pacing issues, because usually the first fifty pages of a story get the most attention from both author and editor. This one began flat and then picked up speed, especially compared to the steady strokes of Rowing to Eden. It makes me wonder if Rogan’s earlier work (which provided such an engrossing distraction from the realities of air travel) received more editing attention, way back in 1996, than any publication could possibly expect by 2013.

You can find out more about Rogan and her eight books on her website—or just get thee to your nearest library, and take one along on your next flight.

One Reply to “Book Review: A Dangerous Fiction”