Home »Sailing»Slowing Down, Down East

After more than fifty summers cruising in and around Penobscot Bay, my father knows all the best places to anchor. And once the windlass has done its work (paying out wet anchor lines is SO yesterday), Mom whips up another delicious dinner. 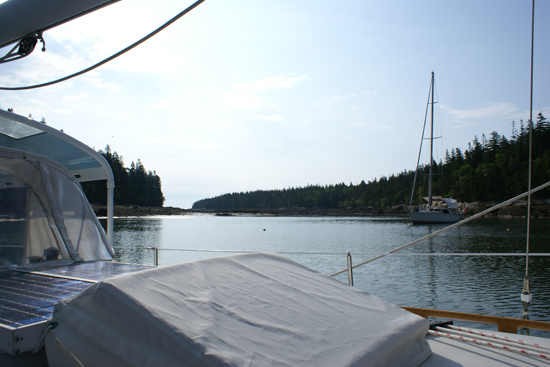 Sometimes the only way to take a break is to head downeast. Photo courtesy PaulCroninStudios

This year’s cruise had the added attraction of joining up with a bunch of like-minded sailors as part of the Cruising Club of America (CCA). We met a few folks in Rockport to tour Bolero, currently undergoing a major refit at Rockport Marine. Nothing like the perspective of a Sparkman&Stephens classic open for viewing (the new deck will go on this fall) to remind us all of the strong link between good boats and great people. (Update: Read about the re-launch of Bolero, which took place in May 2010.)

We left Rockport late Monday afternoon and motor-sailed to Pulpit Harbor, on the west side of Vinalhaven. As a five year old I cut my head rather badly while on a walk ashore there, so it’s a harbor with lots of family memories. Dad piloted us into a favorite spot at the top of Cabot Cove, where we anchored all by ourselves in about 12 feet of water. The quiet coolness provided a pleasant contrast to the heat and humidity we’d been melting under the past few weeks.

One of Dad’s favorite ways to spend a morning is navigating (preferably under sail) through a complicated channel, and Wednesday provided him with just such an opportunity. The south coast of Vinalhaven is littered with rocks of all shapes and sizes, creating a sailing maze. Paul and I manned the sheets while Dad picked our way through, carefully studying the detailed contours on the chart plotter while falling back on an old fashioned, small scale paper chart when he needed a big-picture perspective. Once we emerged into Penobscot Bay again, we close reached across and then beat around the southwest corner, arriving in Tenants’ Harbor in time for cocktails.

On our last morning aboard, we dinghied ashore for a quick walk and ran into several friendly folks. A dry front had passed through just before dinner the night before, leaving behind crisp fall-like air. One man walked by and spoke some Mainer to us around his pipe: “Summah’s ovah.” Another asked for help separating an anchor necklace from his daughter’s fine hair. By the time we returned to Katrina, we felt like locals. And Dad let us back aboard even though we’d failed to find any fresh bread.

Thursday’s sail took us west through some more rocky complicated channels into Muscongus Bay. Around every corner, another understated cottage would peer out at us as we sailed by. After a quick lunch stop and a motor through Friendship for some great boat gawking, we rafted up with a Concordia 45 and a Bermuda 40 and started the next party.

Unfortunately Tropical Storm Danny had changed course toward RI, so we cut short our cruise this year. But we’ll be back next year to enjoy the cool breeze, challenging navigation, and pine-drenched lungfuls that lie at the head of each harbor.

One Reply to “Slowing Down, Down East”