It’s time for a little song and dance, and maybe a sip of some bubbly. A few weeks ago, I finished revising my WIP! (I’d like to declare it completely “finished,” but that’s for others with more perspective to decide.) 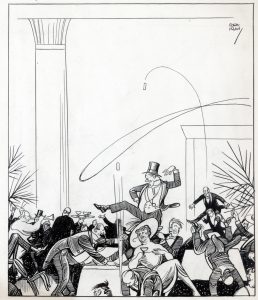 When I finished the first draft last spring, I celebrated then too. I was so excited to finally be able to see the story’s ending and framework, I forgot it was just the first phase of creating a novel that others would enjoy. Yes, there was a story on the page, but a lot of unnecessary stuff had accumulated there as well; pages of atmosphere where nothing much happened. Teaser twists and turns that led only to dead ends. A few extra characters. Several extra scenes.

Here’s what I’m telling prospective agents: “Island Shell Game is about a curmudgeonly ferry captain trying to save his island from developers.” Once I finished that first draft, I could see that. Then, believe it or not, I created an outline. I know, I know… it would’ve been much more efficient to outline first, then write. But that’s simply not the way my imagination works.

Once I had a big picture plan and theme, I worked through the entire manuscript all over again, tossing out anything that didn’t propel the story forward. Unnecessary scenes were removed. A paragraph of description was pared down to its best sentence. A sentence of character description became a single adjective. Words not pulling their weight were eliminated. Yes, there was a little dumpster diving toward the end… but three months later, the manuscript weighs in at “just” 93,000 words.

All those extra words were the only way for me to figure out what happened, and why. Only my characters can lead me to the final page, and they are as unable to predict their own futures as most of my real friends are. Together, we eventually figured out where they were all headed, but it definitely took more time and words than I expected.

Finishing that big revision is just another stage in the progress toward the best book possible. I’ve already received a few requests from agents for the full manuscript, a great sign. But finding one willing to take on a new author of salty upmarket fiction will take awhile. Since traditional publishing is the best path for this book, we will all have to hitch up our publishing patience pants.

In the meantime, I’m popping the cork to toast the magic of revision. Cheers!

One Reply to “Revision Magic: Break for Champagne”