Home »Sailing»Racing with the Next Generation 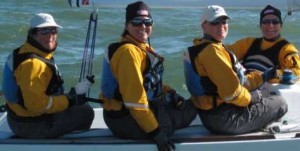 At my very first Rolex International Women’s Keelboat Championship in 1991, I made so many new friends I lost count. Fast-forward eighteen years to this year’s event, and I find myself reunited with many of those women. The difference? This time around, their daughters are here, too.
Mother/daughter outings don’t usually include an international regatta, but several teams here are combining the two ideas. Annapolitan Cathy Parks has her daughter on her team – and her newborn granddaughter greets them when they come ashore. Canadian Katie Coleman Nicoll is sailing with her daughter, college student Clarity Nicoll. The list goes on.

And then there’s local favorite Cory Sertl, a two-time winner of the event. She’s doing the mother/daughter outing a bit differently; teenaged Katja is crewing on a separate boat, for Merritt Moran – seventeen year old daughter of Cory’s longtime teammate Amy Moran. The two daughters have a ten year old in their crew.
And just to prove that sailing is a lifetime sport, 80 year old local Teresa Smith is crewing for 57-year-old Janice Ziobrowski.
Those of us in the middle of the age spectrum are here to enjoy a week of sailing with and against friends new and old.For over twenty years, this regatta has brought together a wide range of skill levels and goals as well as ages, creating a stew that includes every aspect of competitive women’s sailing.

Back in what seems now like the early days of the Rolex (as it’s referred to by followers, after the perennial title sponsor), teams of six women – or in some lightweight cases, seven – battled the wind and waves off Newport in J/24’s. I’m sure we had some light air sailing, but those aren’t the stories we still tell.

This year, teams of four or five women are racing J/22’s in Rochester, NY, and the first day has been abandoned due to high winds and seas. Will the next generation reminisce about today’s weather at the Rolex is 2027?