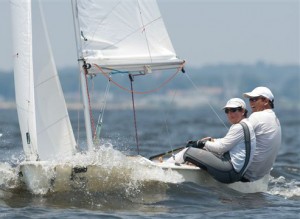 My friend and teammate for this week’s Snipe Worlds, George Szabo, was honored by San Diego Yacht Club with a party to celebrate his recent win of the Star World Championship. The same night, I kicked off the second edition of “Oliver’s Surprise” with a book signing at Bay Books in nearby Coronado.

The Star, a 26 foot keelboat, has been in the Olympics longer than any other class, and winning the world championship is considered one (if not THE) pinnacle of sailing achievement. I recognize many of the names on the enormous silver urn currently displayed in the front lobby of SDYC, and most of the previous World champions who live in the area attended the party. A great celebration of a fantastic achievement, on the eve of another big regatta that George and I are sailing together – the Snipe World championship.

The Snipe has never been an Olympic class but is still well-respected around the world for Serious Sailing, Serious Fun. The boat characteristics (two people, hard chines, heavy displacement and bendy rig) are similar to the Star, though the loads and sizes are much, much smaller. And so are the crews. We are feeling a bit large at a combined weight of 310 lbs, especially for the light winds expected here in San Diego. It’s our first Worlds together, though we have both sailed the event before with others. We’ll certainly give it our all.

The booksigning was a first in a very different way: the first signing where I knew less than half the people. Somehow that made me feel like a real author! Bay Books did a great job promoting the event and Coronado’s downtown was busy with walking traffic, helping the draw. I sold all the books I brought and was happy to see publicist Paula Margulies at the event.

Books and boats… and a book about boats… no surprise there, I guess.