Home »Sailing»Building a Team: The Result 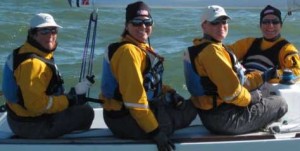 As our lives grow more complicated, it’s hard enough to find anyone with the time and drive to fit in any top-level sailing. But it’s teams, not groups of friends, that are able to climb up the results under difficult circumstances, something we proved on the last day of the 2009 Rolex International Women’s Keelboat Championship.

Some of us are lucky enough to have friends who develop into a team. Kate Fears, Kim Couranz, Margaret Podlich and I wanted to sail together again and chose the perfect goal eleven months out: the 2009 Rolex. Back in November of 2008, we plotted out a practice schedule that included the J/22 Midwinters in February, the Annapolis NOOD in April, and some last minute on-site practice racing in Rochester in September.

As we practiced, we tried different boathandling combinations. Some were an improvement, others we quickly rejected, and a few worked fine until we were actually racing. (I am an expert twing adjuster in practice jibes, but I can’t seem to get it done while also trying to beat other boats.)

Most importantly, egos were left ashore and all four of us provided input on what we thought would get the job done best in a particular condition or situation. Rock-solid boathandling requires a combination of concrete job definition and flexibility, which takes time and repetition to figure out. 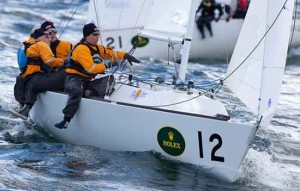 Best of all, we laughed a lot during our training and practice regattas, which made us look forward to the final event even after so much time together.

We showed up in Rochester three days ahead of a four day regatta, giving ourselves the gift of time at the regatta site. When racing finally started, the boat was clean (thanks Margaret), the rig was tuned (thanks Kate), and the cookies were loaded (thanks Kim). I selflessly took on the toughest job: setting a very public regatta goal of a top five finish, on camera with Tucker Thompson. (A more personal goal-to reverse my slide from first to fourth over the past four events-would also put us on the podium. I kept that to myself.)

Racing was cancelled the first day, thanks to a low pressure system packing a forty knot wind line. We happily entertained ourselves by going out for lunch and a movie. I also wrote a short piece on the multi-generational aspect of the event for the Boats.com site. The delay reminded us yet again of how important it is to enjoy the company of your teammates.

After three races on day two, we found ourselves in ninth place—tied for eighth, but still well out of the top five. When racing was cancelled again on day three (not ENOUGH wind, ironically) we knew our top five goal would be tough to achieve. Tucker and his video camera tactfully avoided us in the parking lot.

On the last day with only three races to go, we sailed out of Rochester Yacht Club into a shifty, puffy, eight to fifteen knot northwester and a swirling confusion of steep seas. Difficult sailing conditions for sure, especially since we hadn’t seen waves that big all year. As we sailed upwind to test our rig settings, we all quietly accepted that it would be a tough day to perform well. We also knew that if any team could do it, we could.

Allow me to introduce my teammates:

Kate (bow) does such a great job reading the breeze that Margaret repeatedly asked to borrow her Maui Jim sunglasses. Kate warned us about the sudden micropuffs that could wipe us out or tack us unexpectedly; she also kept us sailing toward the big lines of pressure that would get us to the mark ahead of the group. Even after one really bad start, we rounded the weather mark in first. Downwind, Kate managed to stay on the boat while jibing the pole, even when the deck rolled out from under her in the side-on swell.

Kim (jib) kept us going fast through an endless variety of wind and wave combinations with tiny (but very important) adjustments to her sail. She also reminded me to keep the power on (“fill ‘er up”) if I tried to point too high in the steep chop. Downwind, she worked with Kate to spot marks and puffs, while taking over as principal twing manager. (They are led back to the skipper, and I had promised to adjust them in the jibes. She knew better.)

Margaret (spinnaker) tacked the traveler and played the backstay while keeping track of where we were relative to the course and the fleet. Downwind, with the spinnaker still reacting to one wave when the boat had already slammed into the next, trimming required all of her furrowed-brow concentration. She kept the kite flying out in front of the boat, which helped our speed downwind (and also made us look good in the pictures).

After getting us off the starting line, I just sat back, tried not to tack too much, and chortled about how lucky I was to have such a great team.

On that final day, everything we’d practiced came together. With so much variability in waves and breeze strength, improvisation became especially important. When the kite came down too late in the first race, Kate took over the last of the cleanup so Kim could trim the jib around the mark. When luffing hard into a freak wave on the starting line twisted the spinnaker out of its bag and around the jib sheets, Kim quickly stuffed the kite back into its bag and trimmed in on time. After the start she quietly consulted with Kate to verify how best to clean up the confusion. And once we’d settled in upwind, she fixed it. Margaret and I still don’t really know what happened, or how it was cleaned up so quickly. All we know is that the next set was perfect.

With a pair of seconds in the first two races of the day, we moved up to sixth overall. A third in the final race left us tied on points with two other teams—and we won the tiebreaker to finish third overall. Top five AND on the podium! Both private and public goals were achieved—thanks to four friends who worked hard, laughed a lot, and along the way grew into a team.

Thanks to our sponsors who all played an important role in our steep climb onto the podium: Maui Jim sunglasses, Waterline Systems, Hammer Nutrition, Kokatat, Boat/US, and North Sails. For press releases, more photos, and regatta info, visit the RIWKC website. Photos courtesy of Rolex/Dan Nerney, except as noted.