Home »SUP»Criticism From Shore: It’s All In the Delivery

I was just getting into a groove on my stand up paddleboard when the early morning quiet was shattered by a fisherman yelling at me from the shore. “Hey, couldn’t ya stay farther out? Jeez, how rude.” 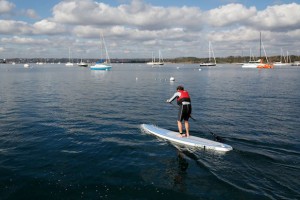 Harbor beauty is easy to appreciate from on top of a stand up paddleboard. Photo: PaulCroninStudios.com

I spluttered a bit trying to come up with a response. I considered the truth: “I usually come in even closer, but I saw your line.” And a few moments later, a sassy retort occurred to me: “Whaddya think, you own the shoreline?” But by then, of course, the response time had elapsed, so he had the last word. I paddled on, turning my aggravation into an accelerated stroke rate.

The fisherman (who, I later learned, has a reputation for rudeness himself) has probably forgotten all about our interaction (though he may now assume that all stand up paddleboards are completely inconsiderate). But it started me thinking about criticism, how unconstructive some comments can be, and how much the delivery affects reception.

This isn’t a new topic; we all know that constructive criticism is more likely to be taken in the spirit intended if sandwiched between two compliments. But that’s not as dramatic, and it’s certainly not what TV promotes. Getting the final word in as loudly as possible is what gets noticed in the stew of noise and distraction we all take for granted these days.

[In an ironic twist, I recently wrote a post on boats.com called Why SUP? Top 10 Reasons to Go Paddleboarding. And I included a video of a paddleboard meant for fisherman. So maybe I should assume this guy was jealous (I was on the water, he was stuck on the beach) and send him the link?]

My response would have been totally different if he’d said, “Hey, next time could you paddle a little further away? That way I can cast without worrying about hitting you.” Instead of fuming about his rudeness, I would’ve planned to adjust my course in future. Which would’ve been better for him in the long run, since my snap instinct now is to paddle even closer, just to prove that I have a right to be there too.

But if he’d been more polite, I would’ve replied with something equally nice. “Of course, sorry!” Which means I wouldn’t have spent the next 10 minutes of my paddle thinking up sassy retorts.

And that means I wouldn’t have dreamed up this blog post. So maybe it all worked out just fine.