Home »Sailboat Racing»Deer in the Headlight: Better Lucky than Good

For those of you looking for a blow-by-blow report of last week’s Snipe Western Hemisphere and Orient Championship, I suggest you read the report on SnipeToday. Because today’s post has nothing to do with books and only a loose association with boats: it concerns one lone deer who (until a few Wednesdays ago) was wandering somewhere along I-80 in Illinois.

I’d always thought hitting a deer was a very stupid thing to do. I still think that, but now I realize how unimportant smart or stupid are in this particular situation. When a head (and a very scared eye) appeared just over the hood of the car, only inches away, there was no time to brace, or swerve, or do anything other than yell “SH*T” at a very loud volume. And once I’d hit the thing, the whole picture changed. Deer in the headlights? Yup. 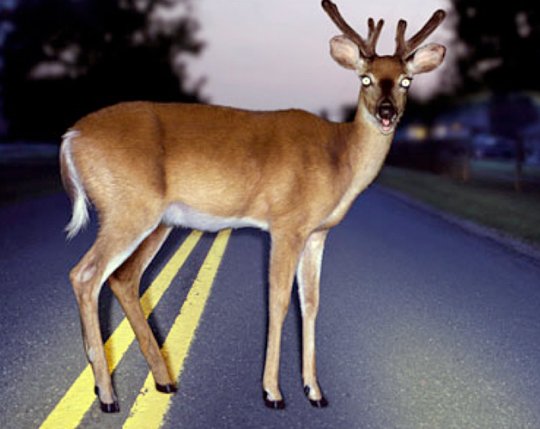 I only saw one eye and the head of my deer, before he was gone again… but he left behind quite a few memories.

We were 1000 miles into a 3000 mile road trip, towing two boats from Rhode Island to San Diego, and yes of course it was 2AM. The good news is that I was wide awake, listening to the radio and probably singing along. Andrew Pimental was nodding off, so his first reaction to the impact was “We’re rolling over.” Fortunately we didn’t, and I quickly pulled to the side of the road to inspect the damage.

Once on the shoulder, however, I could hear the voice of Liz Filter in my ear: “Do NOT stop by the side of the road unless you can’t possibly drive any further. You’re going to get hit.” So after pulling the dangling and probably destroyed side mirror in through the window, I crept on another mile or so to the next exit.

There were two trucks already pulled off onto the shoulder there, so I figured it was a safe place to stop. Andrew and I got out and looked at the front left corner of the car… and we both figured our trip was over. The left headlight dangled from its wires. The surrounding trim was in pieces. Even the front grill had been damaged, though fortunately we didn’t see any deer remnants anywhere. How were we ever going to make it to San Diego now?

(Fortunately, we and the boats and trailer were all fine.)

Necessity is the mother of invention, and it was two in the morning in a very dark, very uninhabited part of the country. It could be hours before a tow truck arrived, and besides, we both hate asking for help. So we got out a flashlight and started pulling out all the loose parts we could reach, all the while looking to see if there were any dripping fluids of any kind. The longer the road stayed dry under the car, the more optimistic we became.

Andrew figured out how to unplug the headlight, which was actually still working (but no longer secured to the car except by the wiring). That large square of unshattered but now useless plexi and plastic dominated a pile of parts that eventually filled up the foot well area of the back right passenger seat. Trim pieces filled up a plastic shopping bag, all too small to save but not exactly biodegradable either. Loose wires were taped up, and a final piece of trim (still secured to the car at the bottom, but flapping at the top) was tied up with line so it wouldn’t drag against the tire. And then we got back in (switching seats, since Andrew very kindly offered to take over driving), started the engine, and carefully crept back onto I-80. 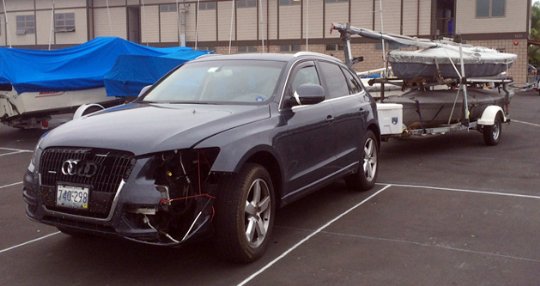 After we got to SDYC I took this photo showing the damage to front grill, left headlight, left mirror, and car door. And there’s a lot you can’t see.

Amazingly, the car drove as if it had never been hit. Yes, we were missing a headlight, and the left mirror (taped back into place) was too low even for me. But the steering, alignment, tires, and other key aspects were all working fine. We spent the next 2000 miles marveling about Audi engineering, which obviously had worked out what should be designed to self-sacrifice and what should be impact-resistant in a collision like this.

We drove through the night as planned, though I was too keyed up to sleep very much during that next shift. When I took over after sunrise, it started to get hot inside the car… and we realized we did have a serious issue: no AC. Unfortunately it wasn’t just a fuse, so we lived with open windows and sweat for the rest of the trip—just like our previous road trips together in older vehicles. The west side of the Rockies in the late afternoon was the worst, with a dropping sun beating in through the windshield. But the car was still going, so a little discomfort wasn’t going to stop us.

Our original plan was to stop somewhere the second night, but the hottest part of the drive still lay ahead. So after a short dinner stop in Colorado we kept going through the night again, taking turns every time we filled up the gas tank and checking on each other in between. (“You okay?” “Yup.”) The outside temperature rarely went below 80 degrees through the desert that night, so it would’ve been brutal midday.

Andrew did admit he was getting a little sleepy at one point, but before we could get to an exit to switch drivers we were pulled over by a state trooper who had noticed our missing headlight. As soon as we explained that we were without AC and trying to get through the desert in the relative coolness of night, he let us go and wished us well. And the adrenaline kept Andrew awake for another two hours.

We rolled into San Diego Yacht Club in time for a well-deserved and delicious breakfast Thursday morning. Elapsed driving time from Jamestown to Point Loma was a mere 51 hours, a new personal record that I have no intention of trying to match or break any time soon. After filling our bellies and cleaning off the road grime with a long hot shower, we got back in the car again (minus the trailer) to head for the local Audi dealership.

Tune back in for part 2 of Deer in the Headlight to see what happens next.

2 Replies to “Deer in the Headlight: Better Lucky than Good”