Home »Editing»Coaches and Editors: What They Have in Common

Next week, as we settle into watch the Rio Olympics, it will be easy to ignore one of the most significant groups of people on site: the coaches. Off-camera, staying well behind the scenes, these folks will play a very important role in making those medal dreams come true.

Of course, a coach’s most important work was done well before the Games even started. Just like an editor’s work is done long before a book is published. And that’s not the only thing the two groups have in common. 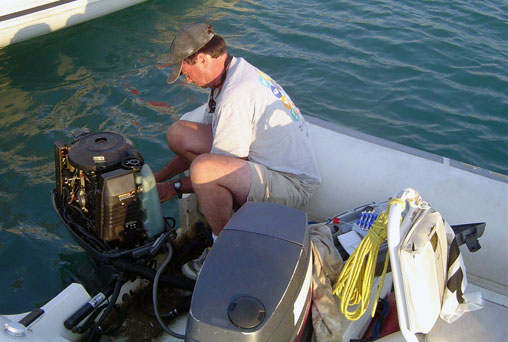 The best editors and coaches work hard to reduce distractions. At Athens 2004, for Gary Bodie, that included making some last-minute outboard repairs.

First off, neither group should be underestimated in importance to the final “product.” A good coach can see an athlete’s weaknesses and direct training accordingly—maybe, given enough time, even turn some of those weaknesses into strengths. The same middle distance required of a good editor is a very useful coaching skill (though “adding a skylight” will obviously mean something completely different).

Second, the best examples of both share a common personality type. While athletes and authors must be their own biggest fans, editors and coaches need to be satisfied with blending into the background. They are not the face of a victory (or defeat); they are instead the invisible backbone that makes a bestseller or medal possible. Dependable, unflappable, calm, and usually quiet, the best will be able to see the big picture—while still keeping a sharp eye on the details.

They must also be okay with never getting any credit for their work. All that unseen background effort to create winning prose or to win medals might not ever be publicly (or even privately) recognized, even by the lucky recipients. Maybe there will be a quick aside during an interview, or a name buried toward the back of a book’s acknowledgements. But most coaches and editors will find their rewards in the work itself, because if they do their jobs really well, observers won’t even see the changes and developments they worked so hard to implement. The best books read effortlessly, just as the peak performances of the best athletes usually look easy.

Day to day, of course, adding and subtracting words on a page or screen is completely different from molding athletes into medal-makers. Editing is quite sedentary, while Olympic coaching requires banging around in a boat often too small for the sea state. And the same place of honor held by the elegant hard-cover dictionary and thesaurus on an editor’s office shelves might, in a coach’s world, be reserved for a rough bunch of wind-noisy, proprietary, rough-cut videos.

These differences in detail explain why, when seeking a new career path, most editors would not think to apply for a coaching job. (Similarly, only a few lucky athletes would ever choose to become authors.)

So as we settle in to watch our favorite athletes perform in Rio, let’s not forget their coaches. They may be doing their best to blend into the background, but they are responsible for much of the success we will hopefully be celebrating.

And the next time you enjoy a book, flip to the back to see if you can spot the editor’s name. And if you do, murmur a quiet “thank you.”