Since 2012, I’ve been stand up paddling (SUP) three or four times per week, year round. It’s a great way to combine time on the water with a workout, in a harbor that offers a surprising variety of paddling options.

Up until this year, the most frequently asked question was “What do you wear in the winter?” (I answered in Dress for Success.)

Now that I’ve added SUP Yoga to my weekly schedule, the most frequently asked question is, “Don’t you ever fall off?”

That answer, up until last Friday, was a firm “No.” Now I have to say, “Only once so far.”

SUP Yoga has been a great addition to my weekly workout schedule. I’ve increased my flexibility and range of motion, as well as improving my balance and comfort level on the so-called “mountain bike” of SUPs, the SIC Bullet, which I’ve been paddling since April. 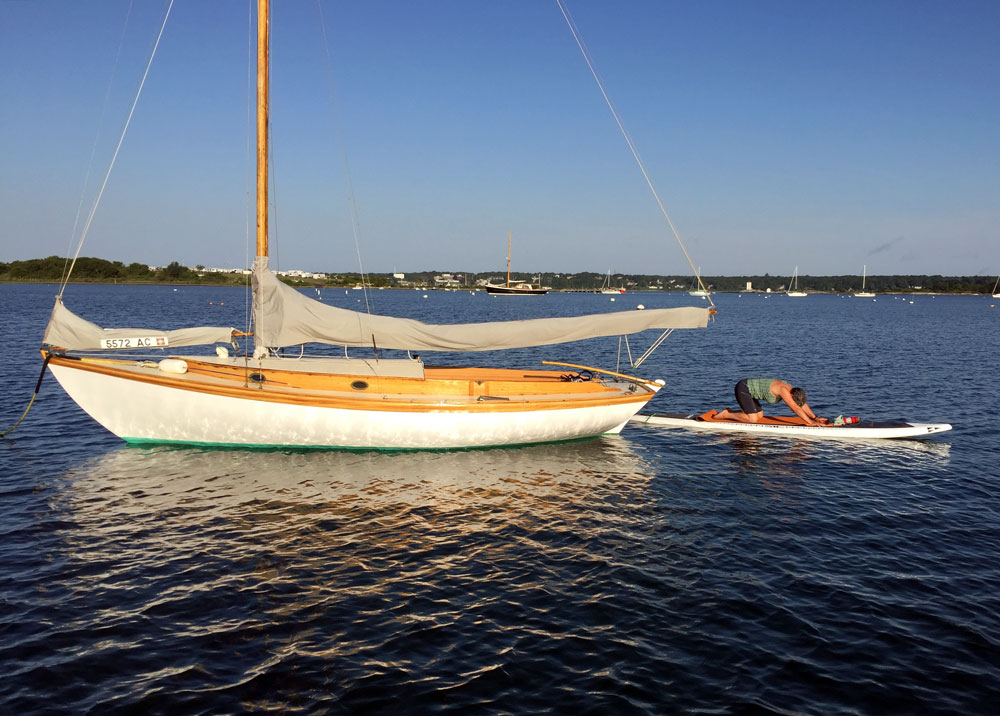 Another beautiful morning for SUP Yoga, tied up astern of Matsya. Photo: PaulCroninStudios

When I fell in, I wasn’t even trying a new pose; I was just settling into a kneeling lunge/twist—and the next thing I knew, I was swimming. I climbed back on the board and tried again, but now my wet skin was too slippery to lock my right elbow against the outside of my left knee. So instead (after a quick chuckle) I moved on to another pose—though I’ll come back to that one again in my next session.

I have the luxury of moving on to the next pose whenever I’m ready, because for me SUP Yoga is a solo endeavour. I paddle my SIC Bullet out to our Herreshoff Fish Matsya (Sanskrit for “lord of the fishes”) and tie up astern, spreading out a yoga mat on top of the board for a little extra padding. Then I spend about forty-five minutes working through various poses, without a lot of pre-planning or forethought. I follow it up with a rewarding swim—diving in, rather than falling in.

I did try drifting, since that’s what I see the local SUP yoga classes doing, but I found it too distracting to wonder where I would end up. Having a stable location in the harbor allows me to drift off mentally, rather than physically—a key piece of why I find this new addition to my mornings so refreshing.

I don’t have a set routine, and there are definitely poses I’ve crossed off my list for now—though I hope to add them in as I improve. Floating yoga also rewards some modifications in form; once my feet move away from the board’s center line, a wider stance is best. And it helps to be planning on that after-swim anyway, just in case I do lose my balance again.

Standing, kneeling, and twisting on such a twitchy platform, I’ve learned a lot about my body’s center of effort—and that has already improved my sailing and paddling. I’ve also gained a completely new perspective on the harbor around me. Downward facing dog frames the nearby osprey nest between my knees and flips water over sky; on one recent reflective morning, it was hard to tell the difference between the two. And when I stand up to paddle back to shore, it always takes a minute or two for the right side up world to settle back into normalcy. Shaking up our viewpoints is something we should all do more often, even if it’s just looking at something familiar in a whole new way.

One of the best things about solo SUP yoga is that I was able to start off very small, with a few simple poses, and then add in something new each time. I also adapt what I do to the conditions. How much I need to focus on balancing the board (rather than just myself) varies moment to moment, depending on three variables: boat wakes, current, and wind. Opening myself up to what’s around me helps to determine my next move.

Here are a few basic poses to try the next time you need a change of perspective:

And when you’re ready to get a little more adventurous, try a kneeling lunge and then work yourself up to a twist (either seated, kneeling, or standing). Who knows, you may even stay dry.

One Reply to “SUP Yoga: Cross Training to a New Perspective”