A few weeks ago, I was invited to talk about Oliver’s Surprise with a group of fourth and fifth graders at a local grade school. As always, I enjoyed the chance to bask in their enthusiasm for the characters I’d created. Hearing Oliver and Grampa and Cap’n Eli talked about as if Surprise were tied up alongside a pier in the next harbor is the closest I will ever come to the parental joy of hearing one’s own child praised by a neutral observer. 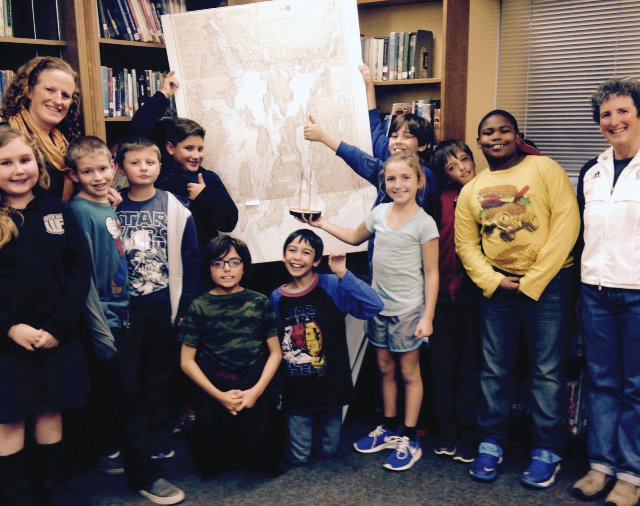 It had been a few years since my last class visit, but I didn’t think about the growing gap between our ages—until the boy who introduced me glanced at my Olympic jacket with its Athens 2004 logo, smiled, and said, “That’s the year I was born!” Which should’ve prepared me for another generation-gap question, several few minutes later: “Is the illustrator your daughter?” (No, she’s my sister-in-law.)

The original Oliver is now in his second year of college. Grade school is a distant memory for him, though not nearly as distant as it is for me. It’s a special age: the joy of discovery, the years just before adults become really, really stupid, when the question “what do you want to be when you grow up” holds infinite promise. Yes, there are bullies, and shyness, and a lack of self-awareness I wouldn’t want to live through again. But part of how I came to the self-awareness I now appreciate was living through fourth and fifth grade. And in hindsight, it was all over in the blink of an eye.

Books, on the other hand, endure. Especially those made of paper and ink. I was asked to sign two of the copies that belong to the school library, copies that were purchased for previous students (who are now in high school) to enjoy as part of the annual program, March into Reading. Opening the books to their title page brought me right back to the creation of that page: adding the schooner, centering my name, dropping in the GemmaMedia logo—which gave it the weight and approval of a real publisher. A first book is like a first child; when you don’t know if there will be any others (and frankly can’t imagine putting in that much labor all over again), it carries the special individuality of standing on its own.

The class had not yet finished Oliver’s Surprise, their teacher warned me, so I refused to answer any questions about what happened next or how the story ended. And as I said goodbye, I savored the thought of the ending they had yet to discover. All of the endings, actually: those I’ve written, those I haven’t yet completed, and best of all, those that they will write with their own lives.