When I first finished this lovely fable of a novel, I didn’t quite know how I felt about it. The ending seemed a bit abrupt, with too many loose ends. 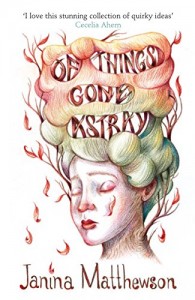 Here’s why that bothered me so much: because each of the characters had seeped into my consciousness, and I wanted them to be granted a happy ending. Instead author Janina Matthewson ended each story realistically, without eliminating the possibility of a happy ending that might or might not occur at some point in the not-yet-written future.

I decided to write a review when I realized I was still thinking about several of the characters a week after I finished the book. And I also wanted to figure out how this unusual story—which is also a collection of unusual stories—could break so many rules and still do its job so well.

The chapters jump from one character to another, and the only common theme is that each has lost something important. Most of these “things” (and I use the term loosely) are items that many of us mostly take for granted. Since the characters are all quite ordinary, it’s easy to empathize with them—and then it’s a quick leap to what our own lives would be like if, say, we woke up one morning to find the front wall of our house had completely disappeared.

Obviously there’s some fantasy involved here, but the writing does its job by anchoring us firmly in a world where such things could happen. And that’s what I mean about rules broken; Matthewson doesn’t fill in all the blanks, which allows our imaginations to work on their own (what would a tree look like once it set down roots in the Heathrow arrivals lounge?). She also doesn’t let coincidence play too big a part in tying the stories together, though some of the characters do come in contact with one another in a natural way—which then alters the progress toward finding what they’ve lost.

I’d recommend this book to anyone who enjoys a flight of fancy or a well-written story that’s a little outside the usual novel comfort zone. And I can’t wait to see what Janina Matthewson comes up with next.