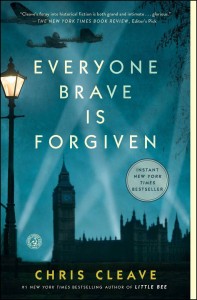 My college major was twentieth century European History and my favorite genre is the historical novel, so I’ve read a lot about World War II. And yet no previous book ever brought to life the Blitz and the siege of Malta as well as this newest novel by Chris Cleave. It’s a story of love, friendship, and the ability to hang on against the backdrop of total war, set in two very different places. Once again, Cleave (author of Little Bee and Gold) has created characters who let us into their world, and the combination of language and details often kept me awake long after I’d regretfully put the book down and turned out the light.

Cleave says the main character (who starts out in a supportive role) was inspired by his grandfather, who served in Malta during WWII. The female character, Mary, draws on both his grandmothers’ experiences in wartime England. Our current world of plenty, with its petty concerns and distant wars, makes it very hard to imagine how people dealt with bombings and hunger and shortages, all while still maintaining the “standards” that so carefully divided classes and races into very clear and well-understood groups. As Mary puts it, “It was simply a peculiarity of the British that they could be stoical about two hundred and fifty nights of bombing, while the sight of her with a Negro child offended their sensibilities unbearably.”

Cleave’s use of language is clever without ever being overdone. Similes and metaphors sparkle, doing their work without distracting, but the real linguistic joy of this book is in the witty conversational banter between friends and family and lovers. Love (platonic and otherwise) lies between every line, rarely spelled out but always understood nonetheless.

Unfortunately the ending lacked the punch and wit of the rest of the book. There were also a few dropped stitches in the plot toward the end. Maybe I was just too tired to absorb the subtleties (reading later than I should have, of course, hungry to finish). Or maybe the rest of the book had just set too high a standard for any ending to be truly satisfying.

Cleave’s writing is an inspiration to perfect every paragraph until it sings. Mary’s sarcastic wit makes me wish to be more clever in everyday conversation. And the ability of all these characters to wake up and deal with the grim reality of war makes me appreciate my own comforts and privilege. So Cleave accomplished the lofty goal he mentions in his excellent afterword—which is so much more than the usual afterthought:

“When I was beginning the project I might have said that by writing a small and personal story about the Second World War, I hoped to highlight the insincerity of the wars we fight now—to which the commitment of most of us is impersonal, and which finish not with victory or defeat but with a calendar draw-down date and a presumption that we shall never be reconciled with the enemy. I wanted the reader to come away wondering whether forgiveness is possible at a national level or whether it is only achieveable between courageous individuals.

“As I wrote, though, I realized I was digging an even smaller hole than that. Now I hope that readers will see the book simply as the honest expression of wonder of a little man descended from titans, gazing up at the heights from which he has fallen.”

Your local bookseller probably has this book on the shelves, since Cleave’s previous book Little Bee was a bestseller. And for those of you who enjoy a good Olympic love story, I can also recommend his less popular novel, Gold.

2 Replies to “Book Review: Everyone Brave Is Forgiven”