Home »Fiction»Writing Through the Weather

I just heard from one of my favorite authors, James. L. Nelson, who is currently working on a new novel. Jim reports (from his home in Maine): “I was looking forward to a cold winter when I would be happy tucked away in my office, but it’s so warm I keep thinking I should be outside doing things!”

Now Jim isn’t complaining about the unseasonable February of 2016; we spent too much time commiserating through the blizzards of 2015 for that. This year’s warm off-season is a pleasant contrast to the past two years, whose entire months of February disappeared under an avalanche of snow, ice, and just plain bone-freezing cold. 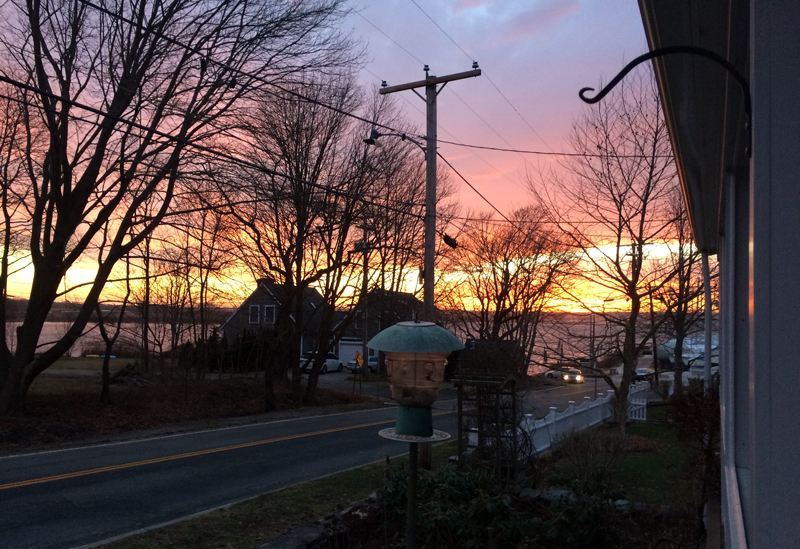 Last January, I wrote a post about SUP as a cure for Cabin Fever. This year’s mild winter has allowed me to maintain a pretty regular paddling schedule. It’s also made walking around the island much easier, since sidewalks remain accessible. Which also helps keep the cabin fever at bay.

But I have to agree with Jim; there’s something so cozy and romantic about writing away at a warm desk, dreaming up warm colorful worlds, while the snow outside the window coats everything a uniform white.

That said, I’m beginning to realize that waiting for the best weather to write is just another procrastination excuse. Once I find the proper mix of inspiration and devotion to a project, I barely notice what is happening outside my window. That must be how my Florida and California friends get any work done; pure focus, spurred on by the luxury of knowing that the weather tomorrow or next week will be just as good as it is right now.

Here in New England, we don’t have that luxury. The weather changes overnight, even hour by hour. So when I see flat calm and sunshine, I drop what I’m doing and go for a paddle. Because I know that later in the day, the next weather system—or just warm air over colder water—will bring in a breeze from one direction or another. New Englanders have to roll with the weather, adjusting our schedule to its whims, rather than “work in the morning and sail in the afternoon,” as many of my SoCal friends do.

And that’s why Jim Nelson and I feel we are wasting a decent February if we hole up inside to write. But since we’re both into projects at the moment, and we know that better weather and longer days are just around the corner (no matter how fickle this New England climate might be), we’re staying at our desks. As Jim concludes, “It’s still too nasty to work on the boat and I don’t feel much like doing anything else, so the writing is going along well.”

P.S. I’m currently reading the latest installment of Nelson’s Norsemen Saga, Glendalough Fair. After devouring pretty much every novel he’s ever produced, though, my favorites remain those that revolve around members of the Biddlecomb family, including the newest, The French Prize.

2 Replies to “Writing Through the Weather”