Although the final regatta of the US Olympic Trials is still going on, seven sailors have already been named to the US Olympic Team. Best of all, most qualified the USA at the same time. 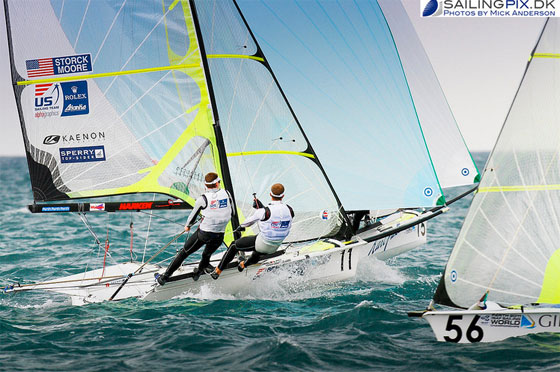 Erik Storck and Trevor Moore thread their way through the 49er fleet. The duo has just qualified the USA for the 2012 Olympics.

Here’s how it works: the top US sailor at two Trials events is selected for the 2012 Games. But except for host Britain, countries must also qualify, which requires placing in the top 75 percent of countries in each discipline at Perth 2011. The numbers vary for each class, but the pressure is the same: sailors named to the Olympic Team don’t get to go if they can’t earn a country slot.

Brother and sister duo Zach and Paige Railey will be going to the Olympics together in the Finn and Laser Radial, thanks to a ninth and third overall in their respective classes. Zach won a silver medal at the 2008 Games; 2012 will be the first Olympic event for his sister. “I think the excitement of winning a bronze in the medal race is all over and it’s starting to sink in that my brother and I are going to the Olympics. It’s pretty exciting,” said Paige after finishing up her regatta in Perth.