I’m a devoted Sunday New York Times crossword puzzler. So devoted, in fact, that I have a Crossword subscription to the Times. And last week I discovered a way to go back in time through words: the archives. 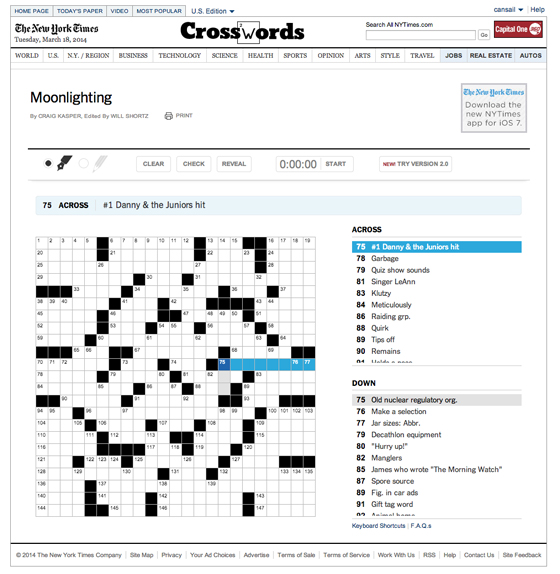 I figured I’d never remember the March 14, 2004 puzzle, and I was right—even though I’m sure I did my best to complete it on the day. But it felt different, looking back on the clues a decade later: the words we use have changed. Back before the financial meltdown, before “Madoff” was a modern name for “Ponzi”, back when phones were called “cell” phones… as the world moved on, so has our use of language. And since the best crossword puzzle clues are nuggets of language based on current dialogue, it’s easy to see the changes by stepping back only a few years.

Of course there are some throwbacks to Shakespeare, Caesar, and even Carole King. (Three letters, “____ Too Late”) But the best wordplay takes place in the language of today. As great crossword puzzle clue writers tighten and refine their word combinations into a kind of haiku, they tease out answers and associations from a common pool that we puzzlers didn’t even know we had stored away in our brains.

That’s the joy of language. And if it were more static, much of that joy would be lost.

My paper copy of the New York Times from March 14, 2004 has long since been recycled or reused to catch paint drips. And even if I had kept it, I fill out the crossword in pen… so the answers would still be recorded. But now that I’ve discovered the archives, every Sunday is a clean slate again. So if you happen to know an 8 letter word for “#1 Danny & the Juniors hit”, let me know.