That question is one of my summer favorites. Last Monday, the text came in from an out of town friend who had stayed over after a weekend regatta; he wanted to sail the evening race series out of Sail Newport. It was going to be a perfect summer evening—breeze, low humidity, sunshine, warm—so I mentally put aside everything I’d planned for the late afternoon and evening and texted back, “yes.” 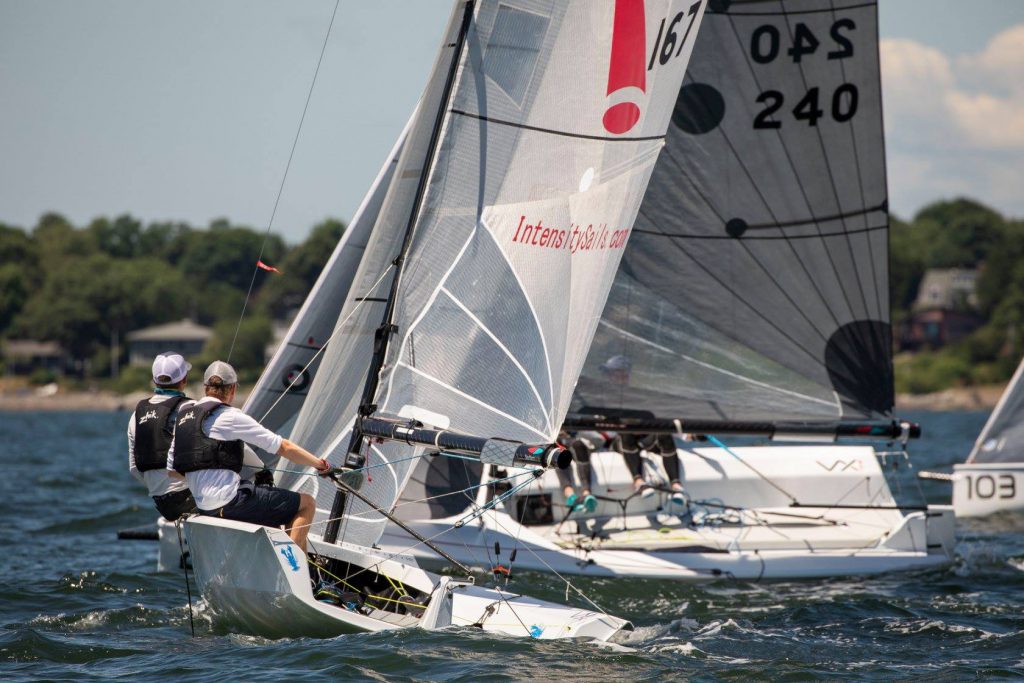 I admit, I’ve been stuck in a very nice rut the past few years. I’ve gone sailing on plenty of boats besides a Snipe, but I’ve rarely raced anything else—and then it was as a crew. Steering a VXOne was a chance to step into the twenty-first century, on a boat that could be seen as a modern evolution of the Snipe. Thanks Jeff!

When we first went out, I was not at all sure that the evening was going to be a success—or that we should actually try to race the thing, even in a small, local, and quite patient fleet. It was windier than ideal for two people (you can sail the boat with three, and it’s recommended over ten knots of breeze) and I was dropping both tiller and mainsheet and falling down just about every time we tacked. When we set the spinnaker the first time, we almost wiped out—but Jeff saved us. And I learned how to bring us back from the edge, which proved useful later in the evening.

Jeff also took care of the myriad of details in the front of the boat—like getting the enormous spinnaker up and down. He knew where I’d trip up, because he’d sailed with a lot of other people who were new to the boat, and he gave constant feedback about trimming, angles, and how fast we should be going upwind or down.

Slowly, I grew more comfortable with the steering, line handling, and speed. We sailed our first race—and, as one of our former skippers used to joke when things didn’t go too badly, “nobody got hurt.” I began to enjoy “riding the edge” off the wind, steering up to keep the boat moving fast and jibing whenever we felt like it. (I wouldn’t recommend trying that in a Snipe.)

We were far more competitive than expected—thanks to excellent boat handling. Sailing back to the dock just before sunset, we were smiling. As the saying goes, it’s the crews that win races and the skippers that lose them. So the next time I get that call to go evening racing, I’ll make darned sure I’m in the company of equally qualified friends.

3 Replies to “Racing Outside the Comfort Zone”