The morning of February 6, 2007 is etched in my memory. Pulling out of the Olympic Sailing Center in Miami with my Olympic boat in tow behind me, I turned right to head north. Next stop: a snow-covered New England driveway, 1500 miles away.

I’d driven the boat home before, but never in February. And never, ever with tears blinding me to the road ahead.

For the previous six years, my Olympic dream had propelled me forward, pushing me to ask for money, set up housing, pack boats into containers, and oh yeah, go sailing. All so we could find the extra ounce of speed we needed to look smart at the next event.

And I’d decided to walk away from all of it. 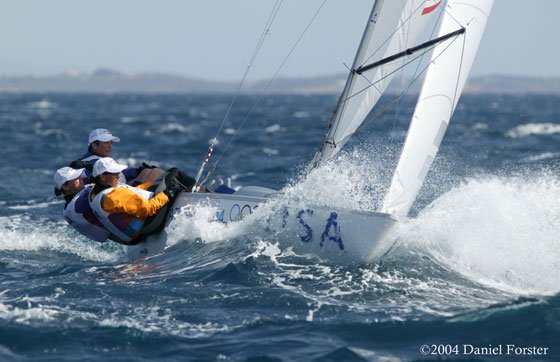 The life of an elite athlete has a pure focus on performance, and everything else that consumes normal people’s days and weeks—home life, casual friendships, job, hobbies, vacations—is burned away by an inner fire. No one who hasn’t lived it can possibly understand the mindset of living, eating, and breathing competitive sport.

And while we’re living and eating and breathing it, that life is all we can see. In the spring of 2004, weaving my way across a boat park teeming with Olympic sailors and the best equipment in the world, I remember thinking: How could anyone ever walk away from this?

But less than three years later, I did walk away. Because I’d realized that trying to keep up with an increasingly sophisticated and time-consuming regatta and training schedule was eating me up inside. I’d gone from a fire in my belly to a gut-burn of anxiety. It was time to step off the Olympic merry-go-round.

I knew it was the right decision, because I no longer had the drive to compete with the best in the world. And I didn’t want to make a half-hearted effort just to avoid quitting.

But it was still really hard to walk away, drive home, sell my two boats, and inform the people that mattered (not necessarily in that order). I was responsible for the dreams of others, too, and it meant disappointing teammates and coaches who’d invested time and money in my ability to claw back to the top again. They couldn’t feel that absent belly fire, and I couldn’t explain where it had gone. All I could say was that it was time for me to retire.

This all came back to me this morning, when I read Anna Tunnicliffe’s announcement that she was retiring from Olympic sailing. Anna has had a much more impressive sailing career than I ever did, which makes her decision even harder: the landing is softer when there’s not as far to fall. And of course she handled it with the perfect mix of humility, grace and dignity. Read her entire retirement announcement.

I’m sure Anna won’t regret this, even as we her fans will miss watching her inspire others with her 4Ds (Dream, Desire, Dedication, and Discipline). And six years from now, hopefully she will see (as I do now) that the belly fire that once ignited our Olympic dreams doesn’t die; it just transfers its heat to new passions and fresh challenges, beyond the world of sailboat racing. That may be harder to fit into a sound bite than “I want to go to the Olympics,” but it’s just as satisfying in its own way.

Good luck to Anna, and to all who look into their hearts and realize it’s time to move on. Retiring is hard, but without that fire in your belly, it’s also the right thing to do.