Yesterday I visited the Bourne Middle School, writing Oliver-based stories in cooperation with about 230 fifth graders—who fortunately were divided across five forty minute periods, and well-supervised by their teachers. First the kids chose a starting and ending point for our story and located each on a chart of Buzzards Bay, establishing our setting. Then I laid down two ground rules: Oliver can’t die, and the schooner Surprise (represented by a not-to-scale homemade replica: see photo below) couldn’t sink. Other than that, it was up to them to write the story. 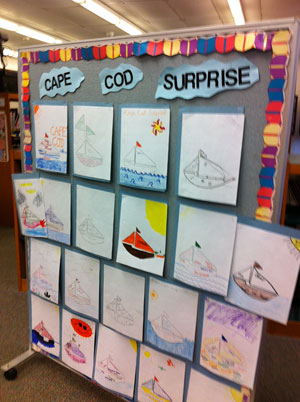 Naming the Villains
The best part was choosing a tasty name for our villains. My favorite for the day was “Bloody Eyed Erin,” but we also had “Red-handed Jill,” (she had closed a door on her hand), “Dr. Platypus,” and “Captain Crunch” (who, of course, had cereal stuck in a mangy beard).

Once we’d established the main characters we “wrote” our story, moving Surprise across the chart every time a major plot point was established until we reached our destination. It wasn’t always a linear progression, and the hardest part was deciding when the story was really over; there were always more ideas begging to be included.

Suggestions came faster than the scribe could write them down, and twenty pages of notes just cover the highlights. We had sword fights and a frying pan used as a shield, treasure chests and gold eye patches, octopi and friendly mermaids.

Teaching Moment
Along the way, a few ideas popped up that (even to a non-teacher) screamed out, “teaching moment!” In our story about going back in time to Hurricane Bob (way back in 1991), one red-headed boy said “My mom told me that whales came into Phinney’s Harbor during the hurricane, so I think whales should help Oliver push Surprise off the rocks.” He’d already figured out how to adapt an anecdote for use in fiction.

What made the day so successful was the kids’ inate sense of story. After any overly off-beat suggestion (ninjas, robots, icebergs) I’d ask, “Does that belong?” The response would be a resounding chorus: “NO!” 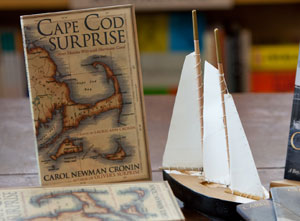 It wasn’t until the third period that I connected the dots… and started throwing the question back at the kids. “How many ideas did we just come up with in twenty minutes?” I asked.

“And how many of those ideas would you want to live with for long enough to write a real story?”

An answer came immediately from one girl in the front row: “Three.”

These kids face the same writing challenges that I do: finding the patience to sift through all those raw ideas and choose the one that will grow into something larger than itself; having the follow-through to edit that idea into a beginning, middle, and end; and—most challenging of all—tossing out the beloved possibilities that just don’t fit the story.

It was a great day, bathing in an ocean of ideas. Best of all, it gave me an answer to “Where do you get your ideas?” From now on I’ll tell anyone who asks, “I go and talk to fifth graders.”

One Reply to “Ideas are the Easy Part: Teaching with Cape Cod Surprise”