For New England sailors, fall means hurricane watching. Some years are quiet, and we go about our lives and enjoy our boats until the weather turns too cold for sailing. Other years, a named storm inspires us to haul out ahead of the usual date. And while the technology and predictions get better with each event, the basic ritual (watch and worry, react or procrastinate) remains the same.

Each person has a different ritual, and it’s usually completely independent of any mapping, predictions, or actual risk. It is affected by whether we have boats in the water or not, and by how protected each harbor is for the predicted wind direction. But most of all, it’s determined by our personalities. The worriers start losing sleep as soon as a storm is named; the planners haul their boats too early; and the procrastinators do nothing until it’s too late. 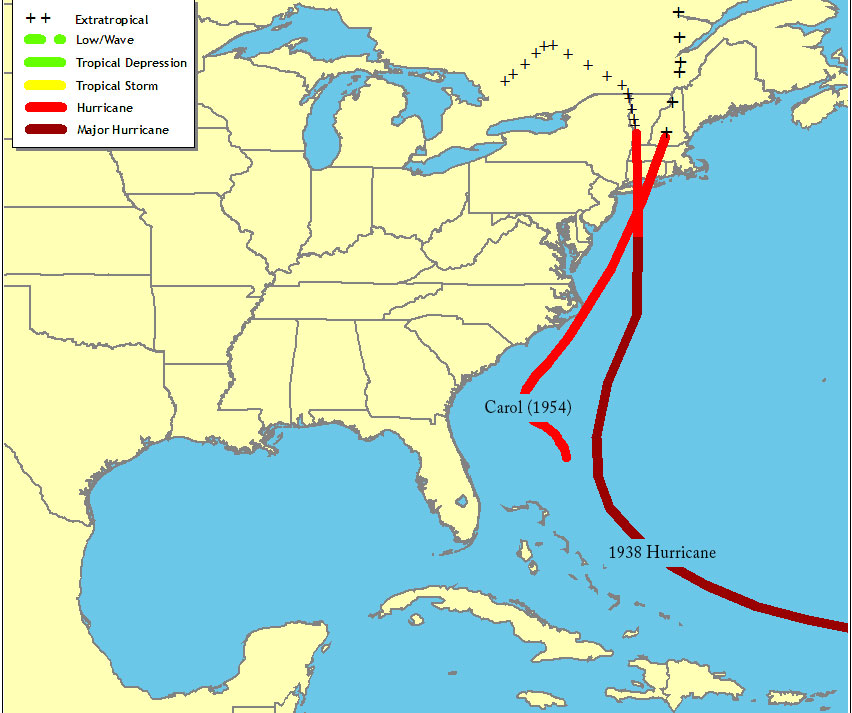 Two hurricane tracks from 1938 and 1954 each affected New England, but their local impacts were quite different. Maps courtesy http://www.nhc.noaa.gov

I’ve written two books about hurricanes that took place, respectively, in 1938 and 1954. Here in Rhode Island, the Hurricane of ’38 is still the basis for comparison for all other storms. On Cape Cod, Hurricane Carol is the standard comparison. Only 40 miles apart, two areas were affected completely differently by those two storms. Which is why even the slightest twitch in predicted track is watched and discussed so avidly by all of us.

Currently we’re watching Matthew, who has already stormed the Caribbean and Bahamas and will likely hit Florida later today. At one point it looked like Matt might sail right up the Intercoastal Waterway, like a fall snowbird in reverse; now it looks like Hatteras will send him packing, back out to sea. Tomorrow, the picture may change once again.

A friend recently turned me onto Mike’s Weather Page, which puts all the various maps in one location. (On mobile, for better or worse, it uses your location to customize the maps.) Mike also does very lengthy Facebook Live videos, which are somewhat useful and definitely entertaining. At the very least, it gives the rest of us weather geeks something to do as we watch and wonder and stew about the latest predicted track.

With so much of life within our control, it’s good to be reminded that even the storms we name are not impressed with our daily concerns. Hurricanes don’t pay any attention to how carefully we plan or how much in control we would like to be. They are bigger than we are, and how we deal with them tells us more about ourselves than about the actual storm.

In the words of one Florida friend, “If you try to plan around hurricanes, you’ll never do anything.” And in the words of another, “At least with hurricanes [relative to earthquakes], you can see ‘em coming and get out of town.”

So whether you are a worrier, a planner, or a procrastinator, stay safe… and keep watching.