My sister Nancy has a theory, or at least she did when we were growing up: that the world is quietly spinning faster with each passing year. That was how she explained the complaint of every grownup—that time goes by faster and faster, the older we get. 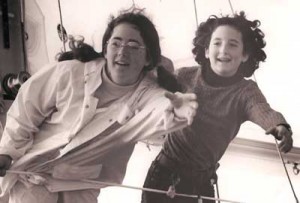 Much as I’d love for my sister to be wrong (sibling rivalry never dies), I’d really appreciate someone proving this particular theory. Wouldn’t it be great to have a scientific explanation for such a universal experience? And it makes sense: when we come into the world, we assume the current rate of spin is normal. As our globe twirls faster and faster, the next generation climbs on and self-adjusts to the accelerated rate—the new normal. And so on.

I was twelve when Nancy first explained this to me, years younger than her own daughters are now. In those days, waiting for the next Saturday was just one step short of sheer torture. A decade later, months went by at a reasonable clip. A decade after that, seasons began to change well before they dragged into dull. Now, even winter seemed too short. And then a few days ago I realized—hey! Where did the first twenty percent of the 21st century GO?

One of the many reasons I enjoy losing myself in the pages of a good novel is that time often slows down. Sure, a good action scene goes by in a flash, eyes chasing forward across words and paragraphs to make sure a favorite character survives with no lasting scars. But a great writer can also slow time to a turtle crawl, allowing us the luxury of time to smell, taste, hear, and savor the world the writer has created. (And maybe as a result, better understand the time-pressured one in which we live.)

When I get lost in my own writing I can even reverse time, turning the clock back to a world that was gone long before I was born. I sniff a distant harbor, trim the luffing sails overhead, feel the bow plunging into waves bigger than I’ve ever imagined before. Even as I edit, I luxuriate in bringing to life a scene that, up until now, existed only inside my head. Did it really happen? Well, no. But could it have happened? That’s the important question.

The non-linear aspect of creative writing adds to this time warp. In order to tell the story I know is hiding within the first draft, I have to spend more time than can really be justified to figure out the best possible word or phrase. Does it need another scene, or one less piece of dialogue? The only justification is the end result. So the hard work of telling the story—the actual wordcraft—reinforces the time-stretching too.

Is it any wonder that the faster our world spins, the more people discover the luxury of writing and reading?

And this, for me, is why books will continue to be valued as we rush ahead into yet another decade. Whether we choose to read on recycled paper, on a screen large or small, or on some not-yet-invented substrate, the stories we experience on the biggest screen of all—the one between our ears—allow us to adjust the passage of time to our own preference.

Even if my sister’s theory isn’t true, that will be a real comfort in the shorter and shorter decades that lie ahead.

Update: Listen to an NPR story on this same subject.