I picked up Belgravia for the same reason many others will do so: because it was written by Julian Fellowes, the guy who wrote, produced, and directed Downton Abbey. The book publishers understood this; right on the cover it says “from the author of Downton Abbey.” The book’s designers understood it too; the black, white and gold cover smacks of a regal past. The only person who doesn’t seem to care particularly why we are all reading it is the author himself. All he wants to do is tell a story.

And that, of course, is why I (and all the others who pick up this book out of nostalgia for a recent TV show) kept turning each of its 402 pages. Like Downton Abbey, Belgravia draws us into a world filled with characters we quickly grow to care about. But the story is set a half century earlier, so it’s only the tone and style that are similar. The characters and plot are both products of their time; Downton Abbey would’ve seemed positively racy to these folks. 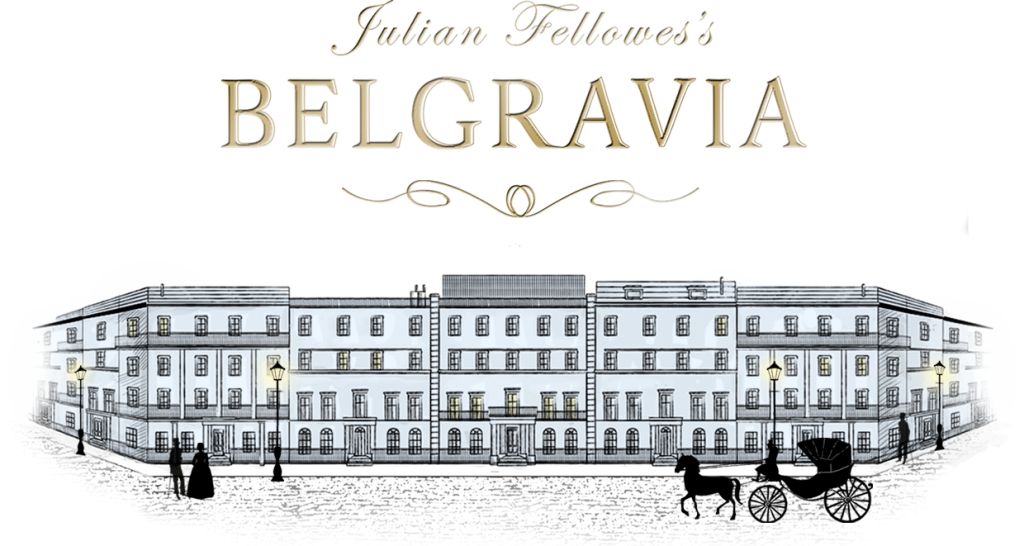 Originally published as a weekly serial, most of Belgravia takes place in mid-nineteenth century London and centers around the Trenchard family, who have made their money in trade. The patriarch James is described by his wife as a “social mountaineer,” a term that describes perfectly his need for acceptance at a much higher peak in society than where he was born. Social mobility was pretty much unheard of in the 1840s, so when lines are crossed the results are scandalous. Once a cover-up is attempted, small coincidences lead to large twists and turns that kept me turning the pages right to the end.

No spoilers here, but the ending was a complete surprise—and yet the perfect wrap-up to this story. Which might sound rather familiar to Downton Abbey devotees.

The plot hinges on the multi-generational fallout caused by breaking the strict rules of society. In the writing, Fellowes breaks a few rules himself. Current wisdom is for authors to stick closely to the voices of their characters, rather than holding court as an omniscient narrator. But Belgravia starts out in the most distant way possible, with a Great Gatsby-esque riff about the past. According to Fellowes, the past is “a foreign country, where things are done differently.” But some things haven’t changed that much, he says; this story is “only too like the dramas being played out in our own ways, in our own time…”

And then without anything more than a line-break of transition, he drops us right into the story—just after what will turn out to be a key event has taken place.

The only thing that disappointed me about this book was the editing. Style-wise it may have been a choice to leave so many rambling sentences in place, though I suspect it was just laziness; some sections read like the first draft of a screenplay. Tightening the prose would’ve made this enjoyable book into a masterpiece.

And there’s certainly no excuse for a top-notch publisher (and a named editorial consultant) to miss so many typos. Most were all too common spell-check errors like her/here or hear/here, but one in particular was quite alarming:

“Maria Grey was wandering aimlessly through the rooms. She saw her mother conversing with my great aunt, and rather than join them for the usual discussion…”

That “my great aunt” made me wonder if the book had originally been written in the first person, and then changed over to third person omniscient so more points of view could be covered. Regardless of the reason, such a glaring error should’ve been caught and corrected before publication.

Thanks to Julian Fellowes’ unique ability to create a scene and then drop breadcrumbs all around to keep things moving along, typos and point of view errors won’t distract most readers from the story. Playful and yet historically accurate, this was a nice reminder of why we all became so caught up in Downton Abbey. As Fellowes says in that out of place and yet poignant opening paragraph, “Ambition, envy, rage, greed, kindness, selflessness, and above all, love have always been as powerful in motivating choices as they are today.” Few authors could have so successfully woven together so many different emotions into just one book—even a book that runs to 400 pages.

For more, visit the Julian Fellowes Belgravia website. And don’t forget to support your local bookseller.