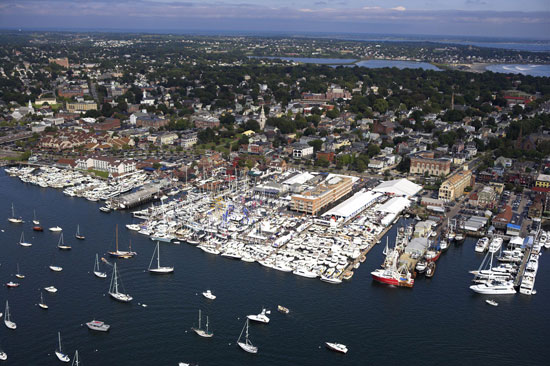 “You wrote these books yourself?”

“What age group are they meant for?”

“Where do I find a bathroom?”

Those are just a random sampling of the many questions I answered this past weekend at the Newport International Boat Show. Probably not the first place you would think of for bookselling, but it turned out to be a great venue for my two Surprises. With abundant sunshine and temps in the 70’s, the weather was perfect for boat gawking out on the docks. And once they’d overcome their own Surprise at seeing books– real books–on a boat show booth table, many of the people pouring down the aisles of Tent C were eager to buy some nautical fiction.

The Author’s Corner is a booth provided for those lucky few who are asked to give seminars during the four day event. My seminar (entitled “Where Books Meet Olympic Spirit”) took place before lunch every day, and whether it was because people weren’t yet ready for a break from boat gawking or due to the vague title, attendance was, well – poor. But sales in the booth were brisk, making the entire effort well worth it.

I had been dreading sitting inside a tent over a beautiful September weekend, and I certainly took several breaks on Thursday and Friday to wander the show and catch up with all my marine industry buddies. But over the weekend, I was simply too busy to get antsy. Handing out bookmarks to anyone who looked like a reader (and US Sailing Team Alphagraphics stickers to all the kids), talking about writing and sailing with those interested enough to stop and chat, and – best of all – signing the books once I’d made the sale; I enjoyed it all more than I expected.

After four days of refining my pitch, I can definitely pass on a few pointers about bookselling at a trade show. It requires a different approach from a bookstore signing, but it can also expose you and your books to many more people than you’d come in contact with at a traditional venue.

1. Find something you have in common, and talk about that.

It’s pretty safe to assume that anyone who walks in the door of a bookstore is a reader. I couldn’t make the same assumption about the people walking down the aisle of Tent C, but I could make a different assumption: they were most likely interested in boats (or at least, interested in SOMEONE who was interested in boats). That gave us something to talk about besides the books I had for sale.

I quickly learned to watch darting eyes, to see if they were caught by the sight of books piled up on a table. Readers notice books; flagging down everyone else by waving a bookmark (or tripping them up) probably wasn’t going to lead to anything but aggravation.

2. Create a visually appealing booth that makes it clear what you’re selling.

Since I don’t do many trade shows, I don’t have a lot of big banners designed to draw in visually overloaded showgoers. Most people didn’t quite understand what an “Author’s Corner” was right away; it would’ve been very helpful to have a background display that clarified our bookselling/author roles.

Saturday and Sunday our table’s visual appeal was greatly helped by the addition of a large hardback called “Steam Coffin.” Author John Lawrence Busch eagerly told anyone who even glanced at his beautiful cover about the first transatlantic steamship. His enthusiasm was infectious, and some of his listeners also bought copies of my books.

Another booth mate, Captain Graybeard, is a boat show veteran who had a wide variety of books, electronics, and weather information for sale– and a free catalog on CD. The world famous cruiser Don Street also made appearances, in between seminars and his visits to the beer tent. So we had something for everyone – softcover fiction, hardcover history, electronic self-help, and nautical legend. But that was also potentially confusing until we learned to explain that we were all operating independently.

3. Give something away that’s easy to carry.

For me, bookmarks work very well as a way to engage people – and I ran through my entire supply. Frequently someone would glance at our table but wouldn’t actually stop until I offered a bookmark. Some just said “thanks” and kept walking, but most would come back to the table and take a second look at what I had to offer. And many of those eventually turned into sales.

People love to feel like they’re getting a deal, so it’s important to have a special offer. For me it was “Boat show special – two books for twenty bucks!” Only a few people realized they could also buy one for ten bucks…

There is a well-known parable about the wind and the sun, each trying to get a man to remove his coat. The wind blows hard and then harder still, but all that happens is the man clutches the coat tighter to his body. Then the sun comes out, and once the man is warm and happy he gladly takes off his coat.

We’ve all been verbally assaulted walking through a trade show, the human equivalent of the wind blowing harder and harder. After four days of watching my booth mates and the other booth operators around me, I tried to be more like the sun and make people happy. Once I got someone’s attention with a bookmark and had given a very short overview about the books, I asked a question about their boat or where they lived. I haven’t met a boat owner yet who doesn’t like to talk about his or her vessel, and I enjoyed hearing about all the different ways people work and play on the water.

Selling doesn’t have to be hard. And boat shows, as it turns out, don’t have to be awful – they can be a great chance to build yet another link between boats and books.