Hello from Miami, where I’m dodging the snowstorms at home and writing about my favorite topic: Olympic sailing. For those of you who sailed in the Miami Olympic Classes Regatta (MOCR) back in the day, you’ll be able to picture the scene quite well. For those of you who don’t remember the MOCR (which turned into the current Sailing World Cup-Miami), or for anyone who hasn’t yet experienced late January at 25 degrees North latitude, let me explain: Olympic and Paralympic sailors from a record-setting 64 countries have descended on Coconut Grove for a week of great warm-weather competition, against the cream of the Olympic sailing crowd. Palm trees, meet pressure: it’s a heady brew, even for spectators.

And the pressure is even greater than usual in this Olympic year. SWC Miami is the last chance to qualify the USA for a slot at the 2016 Games in Rio in three classes (49er, 49erFX, Men’s RS:X; for details, read Olympic Sailors Gearing up for Live Miami Showdown). It’s also the first of two Trials events for many of our Olympic hopefuls. (For qualification specifics by class and athlete, read USA Preview).

The drumbeat of pressure underlying a vacation paradise is something we MOCR veterans can recognize, even if this regatta has never actually been used as a Trials event before. But the visuals are so different, a 1990s time traveler would hardly recognize the boats or sailors. Well-branded and very fit teams. Country flags on most of the sails. A sea of coach boat RIBs, each with an identifying (or sometimes mystifying) three-letter country code on its outboard. Six circles of professional race committee teams, raising numbered flags (5,4,3,2,1) that denote the time left to each start. Twitter feeds updating the order of most mark roundings. Spectator boats filled with cheering supporters. Added all together, it’s much easier to be a spectator these days. 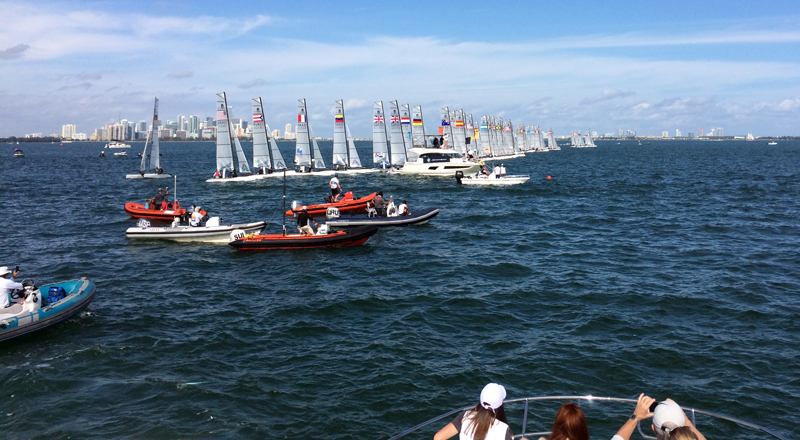 Nacra 17s (a coed boat making its Olympic debut in Rio) line up for a start against the Miami skyline.

You don’t have to be here to “watch” the event, but one major change would be easy to miss when spectating from anywhere else: Regatta Park, the new centerpiece of Coconut Grove. Three fleets (49er, FX, and Nacra) are sailing out of there, which means that all the fleets are now within a half hour stroll of each other along the Coconut Grove waterfront.

I’m writing about Regatta Park for Sailing World, so I’ve been walking around it a lot the past few days. I have to say it’s a game changer for the entire feel of Coconut Grove. What an amazing thing for a city to do: opening up valuable waterfront real estate to anyone who cares to wander through. The paths are wide, the trees add enough shade to keep it pleasant, and there’s still plenty of open grassy areas for non-sailors, even with 200 skiffs and cats currently on-site. 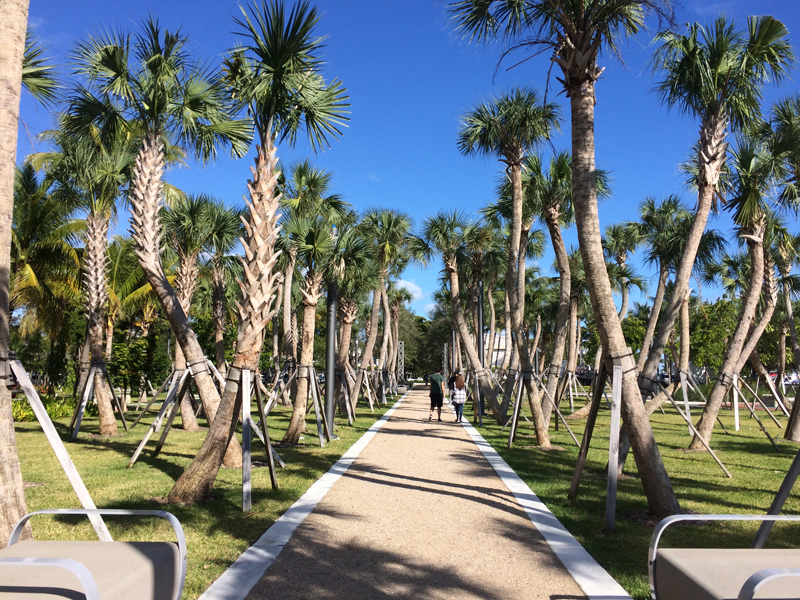 One of Regatta Park’s pathways

I’ve also been enjoying the bay-front walking path, strolling all the way from Coconut Grove Sailing Club to Monty’s without becoming a pedestrian target on Bayshore Drive—though that still requires cutting through a working boatyard along the way.

According to the city planners, Regatta Park is just the beginning of a multi-million dollar renovation to the entire Coconut Grove shoreline. By next January, the remaining pieces of “old Grove” grit (like that working boatyard) may have been completely erased. I sure don’t miss the dirt and crime this area used to be famous for, but I will miss the rough-planked picnic-style waterfront dining of Scotty’s Landing. That building is scheduled to be torn down to make way for “Grove Harbour,” an upscale restaurant/shopping complex that will also replace the Chart House building next door.

Fortunately, the casual vibe of Coconut Grove seems to be holding steady in spite of all the civic improvements. Along the Bay, away from CocoWalk, flipflops still dominate. I only hope that continues, even once the cream of Olympic sailing has moved on to their next venue.