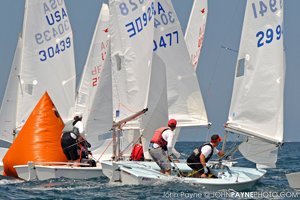 When I think of family, my first thoughts are pretty standard: husband, parents, siblings, nieces and nephews, in-laws. But I’m a member of several other family trees as well. One of those is my family of Snipe.

While most people think of the Snipe as a well-hunted and elusive bird, to me it means a 15 foot sailboat that has been raced hard worldwide by teams of two for almost eighty years. The class motto is “Serious Sailing, Serious Fun,” which offers a wide range of goals: win on the race course, win the party, or try for both.

In mid-March fifty-three boats from nine countries met up in Florida for our annual ten day reunion, otherwise known as the Winter Circuit. We laughed with and at each other, we told and retold jokes, and we even rolled our eyes at the Snipe equivalent of loud Uncle Harry, telling the same tasteless jokes after downing far too many drinks. In short, it was just like any other family vacation.

Some would call this kind of group a “community,” but that just doesn’t communicate the warmth and depth of our shared passion. The Snipe is a hard boat to sail, and the constant challenge of success keeps us all working hard. After a long day on the water, there’s nothing quite so satisfying as reliving the high (and low) points with another skipper or crew. Language barriers disappear; we all speak Snipe.

This was my twentieth Winter Circuit, so I’ve achieved “regular” status. To inspire my continued dedication, there are many sailors who have sailed the boat for five or even six decades. And thanks to a strong junior group moving up the ranks, I know the competition will be top-notch for many years to come. Middle age has never felt so good.

Sometimes just showing up is enough to build relationships. After traveling to the same locations, climbing into the same boats, and lining up on a tight starting line with so many familiar faces from around the world, we recognize each others’ quirks. We share a parking lot, a boat rigging area, a race course, and this forced intimacy is a large part of what makes it all so special.

Besides our sailing habits, we know little or nothing about each other. I can rattle off another Snipe sailor’s favorite shirt and hat color, whether someone is likely to leave the dock early or late every morning, and where most of us are likely to start and finish in a typical race. But I usually can’t tell you what another sailor does during the work week or exactly where s/he lives. And that’s okay; most of us are on vacation, trying to escape from whatever 9-5 routine we slog through between regattas.

Within the family of Snipe, there are also more traditional family units. Sons and daughters sail with their parents until they are old enough to sail with their friends. Husbands and wives sail together—even a few brothers and sisters team up, long after they’ve built families of their own. The multi-generational aspect of the class is a large part of why it feels like one big mostly-happy, mostly-functional family.

And just as no two Thanksgivings are ever the same (even with Uncle Harry repeating the same tasteless jokes), no two Snipe regattas are ever the same either. Seen from the outside the differences may be ridiculously subtle; for members of the clan, a ten minute advance in when one team leaves the dock can provide a topic for in-depth discussion. Does he know something we don’t? Or is his watch wrong?

After each regatta, we drive or fly back to our regular lives again, tired but satisfied. We look ahead to the next event, determined to move up in the standings… or just to share one more story from a past event with one of the junior teams. After all, shared history is a large part of what keeps a family together.

That, and Uncle Harry’s tasteless jokes.

MIDWINTERS WALTZ
White over blue, sun-sparkled hue
Even the clouds light up gold
Salt, rinse, repeat—a burn on my feet
Why does this never get old?

Each year we come down, leave behind lives and towns
To meet up again on this shore
Old lies and tall tales bend like palms in a gale
In this family that shares nothing more

East coast to west, last up to best
Across generations and seas
Together we’ll find a way to unwind
And we know it’s the best place to be