We usually have pancakes on Sunday mornings, but not the traditional flour or mix variety. Instead we make the batter in a blender (a variation on this recipe, though our version isn’t vegan).

Last Sunday, I added frozen raspberries to the blender—which is the first ingredient of my weekday smoothie breakfasts. By the time I realized my mistake, the other pancake ingredients were already added as well… so I made purple pancakes. 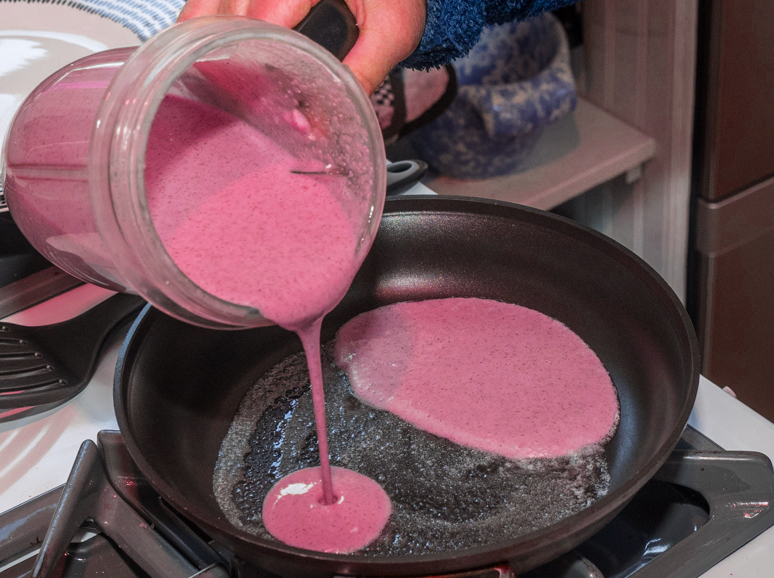 They didn’t cook into puffy delicious masterpieces like the previous week’s version, but they tasted fine. And while I could take a make-lemonade lesson from this experience or blame the obvious culprit (an aging brain), I’m choosing instead to use it as the perfect example of fiction-induced spaciness.

As a reader, you might think that fiction resides in one part of a writer’s brain and fact in another. Instead (at least for me) it’s all one great big jumble.

Fiction-gathering is indulgence in aimless thought about a world that no one else can see (at least until Island Shell Game is published). Downtown for lunch, I’ll see someone with the same hair color as one of my characters—but with other features that are completely “wrong.” That starts me wondering how I “know” such previously unconsidered details about my characters; “she wouldn’t wear that blouse” or “he doesn’t have a watch like that.” Ten minutes later, I’ll realize I’ve been staring off into space and haven’t ordered any food yet.

At the end of each writing day I often still have one foot on my imaginary island, even though I’ve been consciously working on “real” jobs all afternoon. Sometimes (on the best days), it’s hard to define where the real world ends and the other begins.

So there may well be more purple pancakes before I finish this thing.

4 Replies to “Fiction-Gathering and Purple Pancakes”